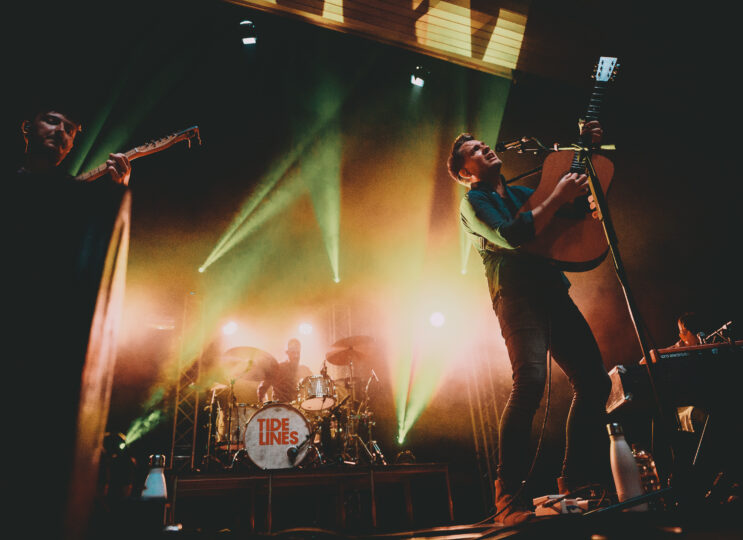 Revive Live presents
Tide Lines
Katie Spencer
Thursday 8th September, Doors 7.30pm
Tickets are £15 (+ b/f) in advance (more on the door).
*You can take a friend for free by ordering a +1 and bringing a National Lottery ticket with you!*

Forged from the literature and music of the areas in which they grew up, Tide Lines meld romantic, rural life with a record collection of classic American songwriters, and a line-up that includes bagpipes and electronics!

The band have built a large & passionate fanbase through blistering live shows and anthemic songs. They headline shows all over the country and have also played to hundreds of thousands at various music festivals. They recently toured the UK with sell out shows including Glasgow, Newcastle, Leeds, Manchester, Bristol, Cardiff and London. Their last Glasgow show was on 12th March at the 2,500 capacity O2 Academy which sold out the same day it went on sale. This was the band’s biggest headline show to date.

Their last album, Eye of the Storm, charted at 12 in the Official UK Album Charts during lockdown narrowly missing the top 10.

Raised in the East Yorkshire flatlands on the fringes of Hull, Katie Spencer’s landscape has always been that of open skies and widening rivers. Industry still shapes the city here. The people, as with the land, are moulded by tides and stark horizons. Stand in the same place for long enough and you can watch the sun rise over the North Sea and then sink into crop fields, glowing auburn in late-summer sun. It is this sense of space and movement that flows through Katie Spencer’s music.

​The songwriting, and most notably her guitar playing stems from a time when the steel-stringed instrument was truly finding its voice. Artists like Joni Mitchell, James Taylor and perhaps most evidently Michael Chapman, flow into her sound, carrying with them the warmth and idealism of the early 70’s folk and songwriter movements.

​Katie Spencer’s highly anticipated new album, The Edge of the Land (2022), follows her debut release, Weather Beaten (2019) which was praised for its unique song-craft, spell-binding musicianship and crystal sonic clarity, as she brought together fans of music from all backgrounds and walks of life.

Delicate and un-rushed, the ten songs on The Edge of the Land drift by like ships on the horizon, yet intimacy and introspection still remain.

​The inclusivity found in her recorded works is most apparent when on stage, with a personal connection and humour that allows the listener time to appreciate the emotion of the music. Her historical gig list is extensive, taking in the world-renowned Celtic Connections and Cambridge Folk Festival, whilst performances with Danny Thompson and Alan Thomson have left audiences in awe of her confidence and craftsmanship.

​’This is beautifully written and played music, with the quiet consistency and confidence in its performers of some of Laura Marling’s best work. The Edge of the Land is an album that doesn’t feel the need to over-embellish its sound; it has the spontaneity that live performance captures combined with arrangements that are unfussy but interesting and quietly adventurous. Wonderful stuff; let this one live with you for a while to discover its powers.’
Folk Radio UK

Revive Live presents
Tide Lines
Katie Spencer
Thursday 8th September, Doors 7.30pm
Tickets are £15 (+ b/f) in advance (more on the door).
*You can take a friend for free by ordering a +1 and bringing a National Lottery ticket with you!*