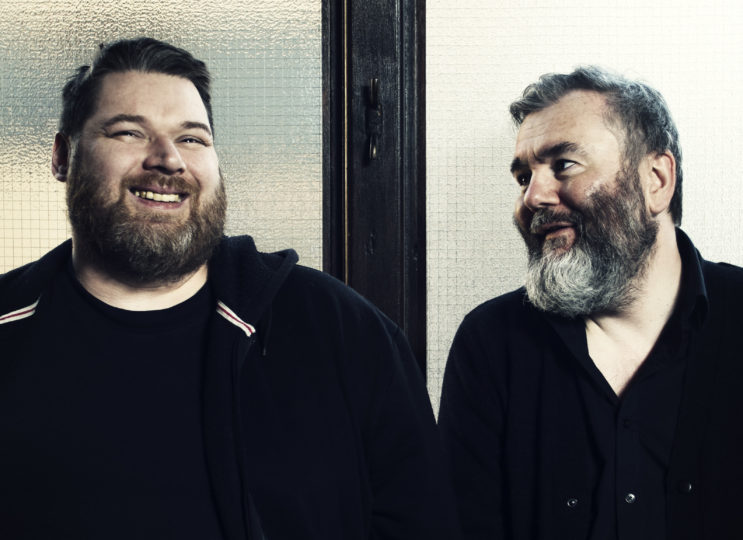 Aidan Moffat & RM Hubbert
John MOuse
The Crescent, York
Sunday 18th August, 7.30pm
Tickets are £15 in advance (more on the door) and are available from Earworm Records, the venue in person or online via See Tickets.

“The album title has a dual meaning – sex and death.” These are common themes from Aidan Moffat; since his early days with Arab Strap, he has explored these subjects with a grace and grit that plunges deep into the human soul. But this is no re-hash of the past, rather a further leap forward for Moffat, now teaming up with fellow Scot, singer and guitarist extraordinaire, RM Hubbert, for this new project.

The album begins with first single Cockcrow and a chance encounter of two old flames as they enjoy hen and stag parties in Blackpool – the album follows their story as it moves forwards (and backwards) with wit and wisdom, exploring themes of love, family, fortune telling, deceit, death, Schrodinger’s cat, the multiverse … and marshmallows. The narrative was influenced, Moffat says, by “an article I read about mothers who abandon their families, and how that still remains a pretty taboo subject in our times. When marriages break down, it’s almost always the man who leaves.”

The video for Cockcrow was directed by Paul Fegan, who made 2016’s ‘Where You’re Meant to Be’ Scottish folk doc with Moffat and is based solely around a performance by Dundee ballet dancer Jack Webb. “It was inspired by a dance piece I saw performed last year by Scottish Ballet. Aidan, Hubby and Siobhan’s song felt both tender and cold, vulnerable and hopeful. Jack Webb, Julian Schwanitz (Cinematographer) and I decided on a simple one-shot idea based on these conflicting emotions. Something dream-like. And we wanted to include a bed given it’s a prominent element in the singles cover art. Bridging a traditional music video and a performance piece, it’s lit in a way that makes the dancer appear like a living painting, specifically an old master, obscured by time – but fierce.” Says Fegan.

We’re chuffed to welcome John MOuse as support too.

John MOuse is a left of centre artist from Cardiff. John’s most recent album “The Fen Sessions” was written and released over a weekend and then deleted on the Monday. Collaborations with Sweet Baboo, Prince Edward Island, Los Campesinos! and TV’s Steve Jones have littered his 5 studio albums all of which have receive critical praise and garnered airplay and support from Steve Lamacq, Tom Robinson, Huw Stevens, Gideon Coe and Stuart Maconie.

John MOuse was born out of John’s previous band JT Mouse, which featured members of Zabrinksi, The Spencer McGarry Season and Steven Black AKA Sweet Baboo. John’s debut album released in 2006, on Crocfinger records was a collection of home tape recordings. It’s “A Universal” showed glimpses of the intriguing lyrical content that John MOuse future albums will become synonymous with.

Aidan Moffat & RM Hubbert
John MOuse
The Crescent, York
Sunday 18th August, 7.30pm
Tickets are £15 in advance (more on the door) and are available from Earworm Records, the venue in person or online via See Tickets.