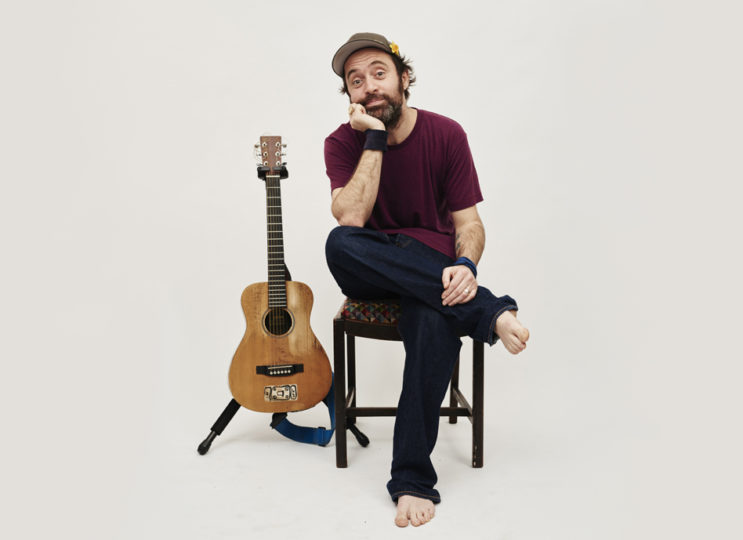 Beans On Toast
‘Sitting On A Chair Tour’
The Crescent, York
Tuesday 8th May, 7.30pm
Tickets are £15 in advance (more on the door) and available from the venue in person, Earworm Records or online via See Tickets.

This May, Beans on Toast will embark on a tour of UK venues. This tour, however, will be somewhat different. The aptly titled ‘Sitting On A Chair Tour’ will see the enthusiastic songwriter playing seated theatres and venues rather than pubs and clubs. He’s promising a unique evening of stories about his travels and songs from his huge nine album back catalogue. Love songs, protest songs and drinking songs are intertwined with the stories behind the songs and the random adventures they’ve led him on.

The tour will coincide with the release of ‘Drunk Folk Stories’ his first book. A collection of ten, short, true-life stories about songwriting, travelling and drinking. Featuring the likes of Billy Bragg, Banksy and The Cookie Monster. From Glastonbury to Wembley via The Bahamas, these first-hand accounts of drunken escapades, car-crashes, recreational drugs and burning pubs are full of humour, grace and honesty – just like his music.

The 1st May also sees the re-release of the 2009 album ‘Standing On A Chair’. The whopping 50-track debut will be released on vinyl for the first time – a double vinyl nonetheless. Produced many moons ago by Mumford and Sons’ Ben Lovett, this much-loved album features crowd favourites such as ‘MDMAmazing’, ‘The Price of Rice’ and ‘Don’t Believe The Bullshit’ and cameos from the likes of Emmy The Great, Justin Young and Frank Turner.

9 years might seem a strange anniversary to celebrate but when he started putting these plans together Beans thought it had been 10 years. But he thought fuck it and went ahead with it anyway. Such is his way.

Beans On Toast
‘Sitting On A Chair Tour’
The Crescent, York
Tuesday 8th May, 7.30pm
Tickets are £15 in advance (more on the door) and available from the venue in person, Earworm Records or online via See Tickets.