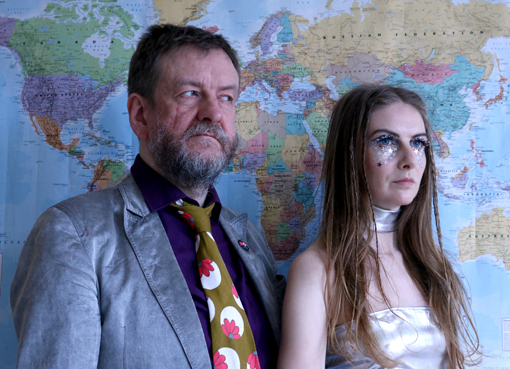 ‘If I could be in any other band, it would be BMX Bandits.’
Kurt Cobain.

BMX Bandits were formed in the ex-industrial town of Bellshill by songwriter and lead vocalist Duglas T Stewart out of the ashes of The Pretty Flowers, a group that featured Stewart alongside Frances McKee (The Vaselines), Sean Dickson (The Soup Dragons) and Norman Blake (Teenage Fanclub).

BMX Bandits’ songs mix melodic qualities and humour with, at times, raw and heartbreaking pathos. Duglas describes their songs as being his world put to music.

Starting with the exuberant ‘E102′ in 1986 BMX Bandits released a series of singles on Stephen’s Pastels’ 53rd & 3rd label, where they were label mates with The Vaselines and Beat Happening. Later they joined Creation Records, home of Teenage Fanclub, My Bloody Valentine, Primal Scream and many others. The group’s most celebrated song is the autobiographical ‘Serious Drugs’, recorded in 1991 but not released until 1993. Oasis did their first UK tour dates supporting the Bandits as a favour to Creation label boss Alan McGee.

Stewart split with his long term musical partner Francis Macdonald in 2005 but 2006 saw a new wave of concert activity and the release of My Chain. Stewart’s writing on the album was compared to Brian Wilson, Michel Legrand, Ennio Morricone and even Alan Bennet. The line up was expanded by the arrival of Stewart’s friend David Scott and new female vocalist Rachel Allison. The follow-up, 2007’s Bee Stings, was influenced by classic girl group pop plus the mellow A & M sound of the late 1960s and early ’70s.

A highly acclaimed feature-length documentary called Serious Drugs – Duglas and the Music of BMX Bandits was premiered in Glasgow in 2011, followed by a series of international festival screenings and an international DVD release. The film featured in Sight & Sound’s top films of the year list. The band released the album BMX Bandits In Space in 2012 on Elefant Records. In Space has been hailed as their most accomplished release so far, “a stunning, brilliant and beautiful album”.

The album features the band’s newest member, multi-instrumentalist and singer Chloe Philip. Chloe brings an extra exuberance to BMX Bandits live shows and is the perfect partner in crime for chief Bandito Duglas and his muse. Duglas’ main collaborator on Forever is Stuart Kidd who first joined the band in 2002. As well as being a key member of the BMX Bandits musical family Stuart has contributed to recent releases by many other artists including Euros Childs, Norman Blake, Gulp, The Wellgreen, Snowgoose, The Pearlfishers and many more. Forever also features a brand new collaboration between Duglas and Brian Jonestown Massacre leader Anton Newcombe.

The line-up of the group continues to be ever changing but the heart and soul of the group remains the same, an extended musical family led by the inimitable Duglas.

Aberdeen indie five-piece Jasmine Minks were long time artists for Alan McGee’s Creation and Poptones labels, releasing a number of singles and albums over the years.

This song is for family loved ones now gone but never forgotten, and particularly for Wattie’s brother and band friend (Phil Duncan) who is currently fighting Motor Neurone Disease (MND). All monies (and we mean every penny) will go to Scottish MND. Phil is focused on fundraising for MND and this is one initiative that aims to do just that. Any airplay would be terrific and a real boost! MND is such a cruel disease. We send you this song for you to have a listen. If you could play it on radio then we’d be eternally grateful. Every single play matters. Phil cycled for Scotland and competed against many top riders (Tour de France guys such as Robert Millar, Malcolm Elliott, Allan Peiper etc) so it’s hurtful seeing such a fit guy struck down.

We hope you like the song and can give it airtime and get awareness of MND out there at the same time.