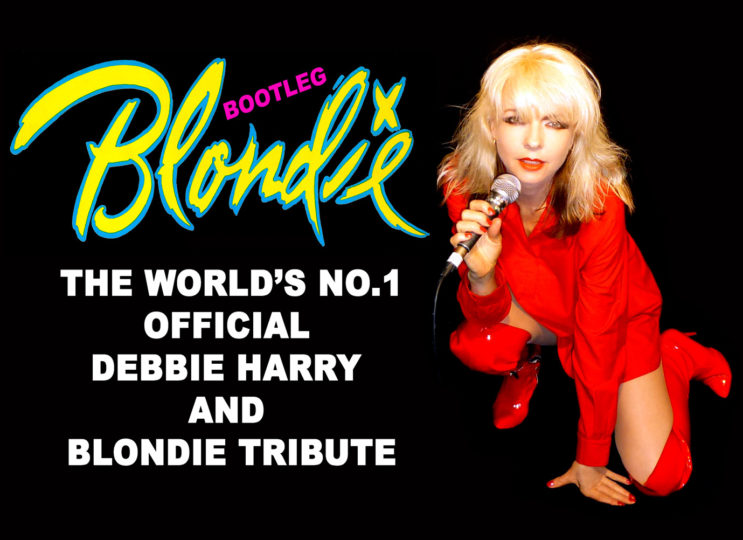 TV’s Over presents
Bootleg Blondie
The Crescent, York
Saturday 15th January, 2022 7.30pm
Tickets are £15 in advance (more on the door) and are available online via See Tickets.

Bootleg Blondie is the world’s No. 1 official Debbie Harry and Blondie tribute band.

Established in 2001 this band are the only Blondie tribute to play the legendary CBGB in New York City before it’s demise in 2006 and unique in that not only have they had the honour to be thanked on Blondie’s 11th album ‘Pollinator’ but have actually played not one but two tours in the UK with Blondie’s legendary drummer Clem Burke, under the band name CBBB (Clem Burke & Bootleg Blondie).

During a day off on the first UK tour Andy Harris (the Bootleg’s guitarist) wrote a song with Clem. They recorded the track in South London and named it ‘Enigma Soho Au Go Go’. Debbie Harris (the Bootleg’s lead singer) put down some vocals and the single was released in April online (AppleMusic, Spotify, Deezer, itunes) by Pop-Up Music and on vinyl.

Debbie Harris and Bootleg Blondie can be seen at all the major venues and festivals around the UK and Europe having played the Isle of Wight Festival, Shepherds Bush Empire, the 100 Club, the Hammersmith Palais, the Electric Ballroom London, Eric’s Liverpool, Dingwalls London and have opened for amongst others The Undertones, Slade, The Beat, Bad Manners, Sophie Ellis Baxtor, Faithless, UB40, Sister Sledge, Bootleg Beatles, Heaven 17, Toyah, Visage, Hazel O’Connor, Tony Hadley, Bananarama, David Essex, Nick Kershaw and Chas and Dave!

Debbie and the boys have met the REAL Blondie many times. Debbie Harry wished them good luck with their show for their gig at CBGB NYC back in 2006 and when Andy and Debbie got married in March 2016 they received two video clips from both Blondie and Debbie Harry herself congratulating them on their wedding day. What a wedding present!

Debbie Harris, lead vocalist of Bootleg Blondie, has the looks, the voice and the attitude of the original Blondie bombshell and like her heroine is typically outrageous on stage. She has been known to wear dustbin liners, thigh length boots and t.shirts with more holes than t.shirt! Debbie’s pride & joy is her guitar which she plays at every show and is signed by all the Blondie band members. She appeared recently in the Mail On Sunday EVENT Magazine and performed on two shows for BBC1 when she was picked out of 15,000 applicants to represent Debbie Harry on ‘Even Better Than The Real Thing’ hosted by Paddy McGuinness which attracted an audience of 10 million viewers!

Debbie Harris is the niece of the celebrated singer and actress Shani Wallis who is best remembered for her performance as Nancy in Lionel Bart’s musical film ‘Oliver’!

‘Thank you for your support’ CHRIS STEIN

TV’s Over presents
Bootleg Blondie
The Crescent, York
Saturday 15th January, 2022 7.30pm
Tickets are £15 in advance (more on the door) and are available online via See Tickets.

@mikartistiksegotrip are back in The Crescent in M

Support announcement! @onipamusic will be joined

LIVE MUSIC! Unbelievable scenes. We have a very fu

What a great line up for @benjaminfrancisleftwich'

We're very pleased to say this beauty now has a ne

It’s @yorkzinefest today! Come down and have a p

It must be nearly Christmas because it's time to w

Come dance off that Christmas tummy and spend that

COVID UPDATE We wanted to put out a brief statem

Four of our cities best young bands come together

We’ve put on a marvellous buffet in the front ba

Two great shows in March on sale this morning! @st

The DIY Class Of 2022 tour is coming to The Cresce

Announcement number one of a very busy day here! @