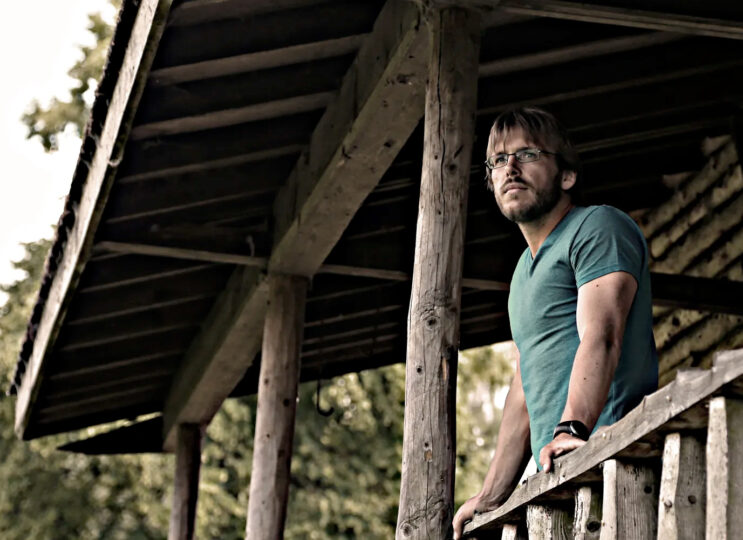 Dan Webster
Bella Gaffney
Sunday 3rd October, 7.30pm
Tickets for this show are £8 in advance (more on the door) and are available online from See Tickets.

*THIS IS A SEATED SHOW WITH ALL SEATS UNRESERVED*

Dan Webster has been described as ‘one of the U.K’s best kept musical secrets and one not to miss!’, ‘Achingly lovely, like sun breaking on a rain swept highway…’ RnR and an ‘An insightful lyricist with a great voice’ Acoustic Magazine. According to Americana UK – ‘He is the missing link, the joining point, where folk fuses with country – as good as you’ll hear on any record out of Austin or Nashville – beautiful – he is Anglicana’. Dan is a road- seasoned English singer-songwriter and guitarist, his music is influenced by the sounds and storytelling traditions of Americana, which he uniquely melds with an honest Northern English perspective in his songwriting. His sound is unashamedly influenced by the US – his heart remains a Yorkshireman’s.

Dan like his band is a formidable live performer – inspiring attention; pulling you into his work with finely crafted melodies and lyrics – delivered with a powerful and honest vocal…fantastic solo, duo, or with his band. They’ll have you laughing, dancing and crying.

The press is unanimous!:

‘Dan Webster’s subtle exploration of the human heart resonated with me after each spin of his fine new record… which draws assuredly on folk and country roots from across the Atlantic but remains assertively northern English.’ RnR ****

‘THE TIN MAN will make it on to a fair few ‘Best Of’ lists, and deservedly so.’ Maverick Magazine ****

‘Mixing folk, country and even a little rock ‘n’ roll, all delivered with a clear, distinctive voice, some great playing and an immaculate sound, it stopped me in my tracks.’ Folk Radio UK

‘There’s a real exuberance to the performance, the audience were soon having a hoe down as the band’s energy became infectious, the crowd were enthralled.’ Kendal Calling review by 3 Songs and Out

‘The Tin Man may forever be in search of a heart on the road, Dan Webster has it in abundance and it shows with each passing song on his latest album.’
Liverpool Sound and Vision ****

‘He is the missing link, the joining point, where folk fuses with country – as good as you’ll hear on any record out of Austin or Nashville – and Alt rock.’ Americana UK 9/10

2016 Celtic Connections Danny Kyle Award winner Bella Gaffney hails from Bradford. She writes folk inspired songs which she performs along with her own original arrangements of traditional pieces. 2021 will see the release of Bella’s new album which is inspired by connections made over the lockdown period; this project is funded by Arts Council England. In 2018 she was one of the first recipients of a Friends of Towersey Festival Award for music developmental support and opportunities. She has played many folk and music festivals over the last few years, including Celtic Connections, HebCelt, and the Gate to Southwell, to name just a few. 2017 saw the release of her solo album ‘Heaven Knows’ with Folkstock, to great reviews.

Bella also performs with sought-after celtic/bluegrass band The Magpies with Holly Brandon & Kate Griffin. 2020 got off to a flying start for the Magpies with a UK-wide album pre-release tour in March. This was sadly curtailed following the Covid 19 lockdown. Their debut album ‘Tidings’ was released on June 5th to glowing reviews in the Sunday Times, The Daily Mail, The Daily Express and more. They have recently been played on Mark Radcliffe’s Radio 2 folk show! 2019 saw them go to Folk Alliance International in Montreal, on tour in Ireland and to Costa del Folk in Portugal. They have played many esteemed festivals including Cambridge Folk Festival, Towersey Folk Festival and Glastonbury!

It has been a busy year for singer songwriter Bella Gaffney. Covid 19 has changed the way we operate as musicians. Making music and interacting with fellow musicians has increasingly happened online. New relationships have been fostered by exciting new initiatives such as Global Music Match and Bella has made the most of these new national and international connections with other musicians by creating an album (release 2022) exploring and celebrating these ties. The album highlights artists from across the world – from Canada to Australia to Yorkshire; featuring such luminaries as Sam Kelly (UK) and Hussy Hicks (Australia).

‘Black Water’ is a song celebrating the beautiful Dales River, the River Warfe. Bella took comfort over lockdown knowing that this mighty river connected her to family and friends miles away. It seemed fitting to feature Yorkshire based fiddle player Emily Lawler on this track. Produced by the wonderful Dan Webster in York, this track is an homage to the beautiful Yorkshire landscape & Bella’s connection to the land.

Dan Webster
Bella Gaffney
Sunday 3rd October, 7.30pm
Tickets for this show are £8 in advance (more on the door) and are available online from See Tickets.