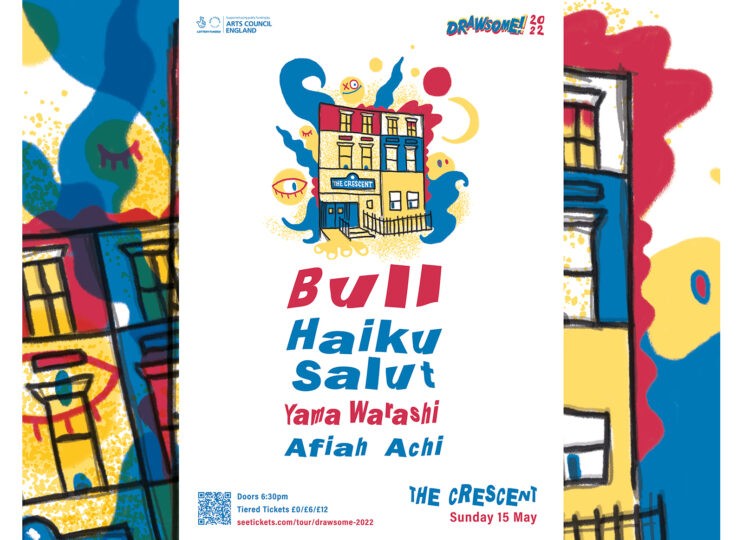 Drawsome
Feat. Bull, Haiku Salut, Yama Warashi + Afiah Achi
Sunday 15 May, Doors 6.30pm
Tickets are based on a pay-what-you-can-afford-type basis up to £12 (+ b/f) in advance (more on the door) and available from See Tickets.

Plus exhibition from Yama Warashi, and free Recycled Robot making and York Zine Fest workshops in the day from 12pm.

Formed by vocalist and songwriter Tom Beer and guitarist Dan Lucas, Bull’s mission is simply to make the music they wanted to listen to, inspired by their 90’s heroes such Pavement, Yo La Tengo and the Pixies. The rest of the band came together through a mix of friendships and happenstance. Drummer Tom Gabbatiss joined after he and Tom jammed together in bars while they were back-packing round Thailand, and Kai West had previously used to jump up on stage with the band and “Bez” (verb meaning to dance badly while intoxicated) before they eventually let him play bass.

Haiku Salut are an instrumental dream pop and electronica trio from the Derbyshire Dales. The group consists of multi-instrumentalists Gemma Barkerwood, Sophie Barkerwood and Louise Croft. Between them, Haiku Salut play accordion, piano, glockenspiel, trumpet, guitar, ukulele, drums and melodica. Their music also features electronic elements, which they refer to as “loopery and laptopery”.

In the first two years of forming the group have released an EP and a long player titled ‘Moon Egg’ on Stolen Body Recordings which have picked up support from BBC Introducing, the British Underground, Radio 3’s Late Junction and BBC6 Music. Their music included on Wire Magazines give away, heavily discussed on the blogosphere including The Skinny and Loud Quite. Live performances include Latitude Festival, Green Man and support slots with the likes of Flamingods, This is the Kit and Dakha Brakha.

In 2017 Yama Warashi were awarded the PRS Foundation Fund in order to record their second album with Ali Chant(PJ Harvey, M.Ward, Perfume Genius) at Toybox Studios. The new record due for release in 2018 will be toured extensively through out Europe.

Student musician from London (Croydon) studying at the University of York who has just released her debut album “Gorgeous Groove”. Multiple shows within York after her album release has helped her to gain some momentum. Her musical style is mostly neo-soul however she explores many different genres since her own music taste is wide; genre fluid. Her song “purple lake” for instance is a slow, bedroom pop, love song compared to her fan favourite “NRG Enormous” which has an upbeat garage, party vibe and showcases her rapping as well as singing. From a young age, Afiah has enjoyed songwriting as a form of expression and all of her songs shed light onto feelings of highs and lows. Musical inspirations come from the likes of artists such as IAMDDB, Greentea Peng, The Weeknds earlier stuff and a mixture of other artists.

Drawsome
Feat. Bull, Haiku Salut, Yama Warashi + Afiah Achi
Sunday 15 May, Doors 6.30pm
Tickets are based on a pay-what-you-can-afford-type basis up to £12 (+ b/f) in advance (more on the door) and available from See Tickets.