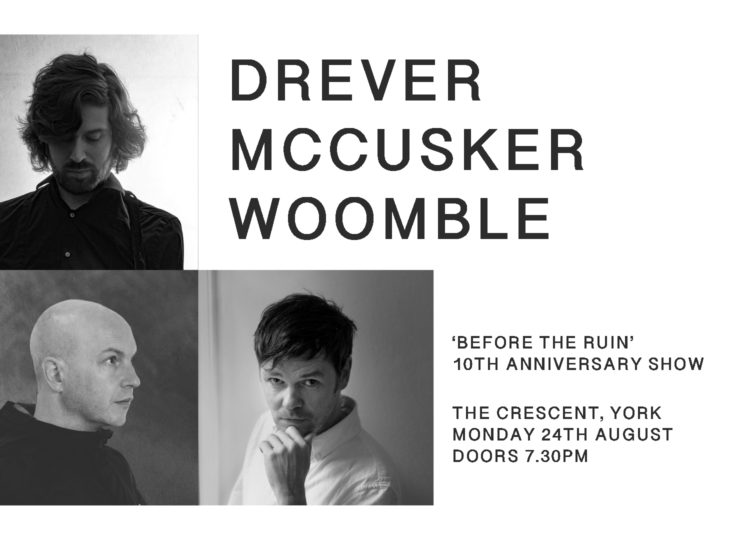 **This show has been cancelled due to governmental social distancing measures put in place to combat the COVID-19 outbreak. All online tickets purchased will be refunded automatically and all refunds for physical purchases will be available from your point of purchase.**

It’s been a decade since the release of ‘Before The Ruin’ – the collaborative album between three of Scotland’s best current writers and performers – award winning folk musicians John McCusker, Kris Drever (LAU) and Idlewild frontman Roddy Woomble.

Since its release the album has gone on to become one of those rare things – a word of mouth success, admired and loved by those who know it, and a slow burning contemporary Scottish folk classic.

Poetic, melodic and atmospheric, and featuring contributions from Radiohead’s Philip Selway, Norman Blake and Francis MacDonald from Teenage Fanclub and Donald Shaw from Capercaillie, there is an unruffled, hand-woven synchronicity to ‘Before The Ruin’. As the BBC said at the time “Taking traditional folk as a starting point, they add in splashes of CSNY, pastoral Zeppelin and Radiohead, to make something that, in this world of transient pop daisies, is resolutely made of long-lasting oak. Before The Ruin is an important work, crammed with deft, sweet touches”.

The record received extensive play on Radio 2, Radio 3 and BBC 6 music and the trio played over forty shows around the UK after the record’s release, but have spent the last ten years within their various own projects. This will be the first time onstage together since 2008. Three talented and unique musicians performing a collection of melancholic, poignant & much-loved songs.