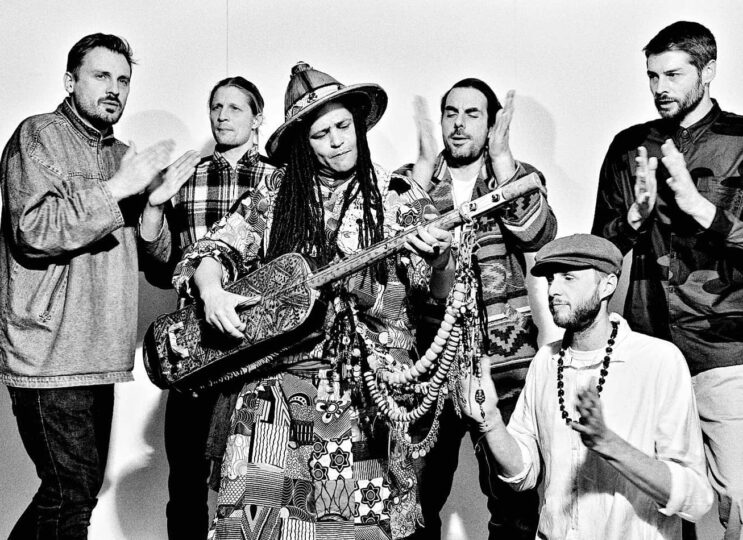 Ouroboros presents
Electric Jalaba
Thursday 25th November, 7.30pm
Tickets are £12 in advance (more on the door) and are available online via See Tickets.

“Their most impressive work to date. A wonderfully visceral record.” Future Music

“A strong album that is exploratory while remaining well rooted in tradition.” Songlines

The best music takes you away. It reconnects, and renews. It has a vibe born in the ancient culture of immediate creation, a heightened state summoned by the shapes of psychedelia and the echoes of Jamaican dub, by the cyclical trance of electronic music and the transformations of jazz.

By the hypnotic pulse of Moroccan Gnawa music, a North African tradition with healing at its core and roots reaching further down into the Motherland.

All of which and more swirl inside the music of Electric Jalaba: six musicians with an empathy that feels telepathic, and a groove that immerses and dazzles. In Arabic, the mother tongue of Moroccan-born singer and guimbri player Simo Lagnawi, a leading practitioner of Gnawa music in Britain, they call this subcurrent, this indefinable quality, ‘el hal’. The feeling.

“It’s the feeling that comes when we’re grabbed by the music and lost in the groove,” says producer and bassist Olly Keen.

El Hal is the new third album from Electric Jalaba, and their first release in five years. It’s a multi-faceted work that finds the band tighter than ever, deploying a vast cache of influences across nine tracks improvised and developed in their south London studio then deftly produced by Keen.

“The trance-inducing effect of Gnawa was what hit us first. It was visceral, heart stopping,” continues Olly, whose siblings Henry Keen, Nathaniel Keen and Barnaby Keen – make up Electric Jalaba alongside Anglo-Italian kit drummer Dave De Rose and Simo Lagnawi on vocals, krakeb and guimbri.

“I want to make music that hasn’t already been done,” says De Rose, whose rebel prowess has made him drummer-of-choice for the high-profile likes of Moloko, Mark Ronson and Mulatu Astatke. “With Electric Jalaba I got to know the traditional Gnawa rhythms first, then I brought my own thing in”.

“Simo selects the chant from the traditional song suites,” says Olly. “Then as a band we extend these short pieces of ceremonial music into a longer piece structure and experiment with sounds.

Much of the musical chemistry stems from Electric Jalaba’s very own musical brotherhood: Henry, Olly, Nathaniel and Barnaby Keen, who grew up in Dorset playing music together, and whose individual multi-talents and respective immersive travels in Europe, the Americas and West Africa make for cliché-defying fusion; who with De Rose and Lagnawi explore the myriad possibilities of Gnawa music while always respecting the genre’s spiritual roots.

Henry Keen, the eldest, has a background in electronic dance music and club culture: “Whereas my three brothers picked up instruments and started playing in bands, I was collecting records, getting into Detroit techno, Chicago house, synth pioneers like Herbie Hancock and ambient music on labels like Warp,” he says. “For me DJ-ing and Gnawa music are similar. Repetitive beats. Elongated song structures. That feeling of being lost in the groove. That feeling of being outside of yourself but totally within yourself at the same time… That’s what all of us, collectively, are striving for.”