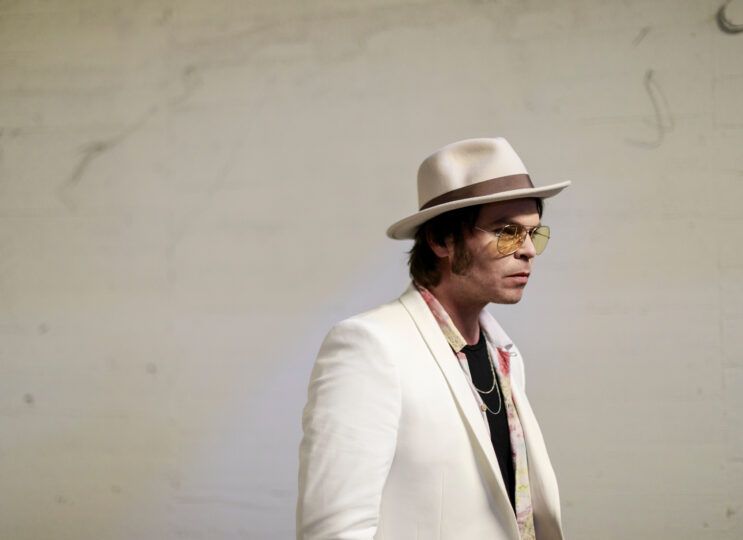 Seventeen years in the same band, and you can start to forget things. Gaz Coombes is recovering a feeling – the moment you first realise that music can give you goose-bumps, make your hair stand on end. He got it aged fourteen, and he’s getting it again now. It was a “new emotion,” he recalls. “Like nothing I’d felt before, and it would choke me. I was always in tune with that feeling, but never quite brave enough to explore it myself.”

For nearly two decades with Supergrass, Coombes came to embody the oddball end of British indie and Britpop. But it is through his solo work that he has found himself. With his 2015 album Matador, he presented a new musical identity: wide-screen, emotional, cinematic and full of artistic surprises. It earned him a Mercury Prize nomination. “With Matador I almost got it right…” he says.

With World’s Strongest Man, Coombes brings that solo self into dazzling definition. There’s more space and light in the music, which takes its motorik drive from krautrock (first single, Deep Pockets, is surreal night-time car journey) and its subtle soundscapes from introspective West Coast hip hop. Lyrically, he points the searchlight inwards to explore what it means to be free and doing life on your own terms. But this is an album more outgoing than its predecessor – with a greater variety of moods than we’ve heard from him before.

Coombes overhauled his home studio, dragging everything from the basement of the house he shares with his wife and two daughters and taking over the first floor – the living space became a happy tangle of drum machines and synths. The World’s Strongest Man is exquisitely made and lovingly lo-fi. Musically, it almost refuses categorisation: Walk The Walk could be Thom Yorke singing funk over a track by NEU. There are gorgeous, experimental electronic landscapes, but there are choruses as lush as any of the top ten hits he’s known for. As with Matador, he played most of the instruments himself.

Piney Gir, who the Independent rightly called a “transatlantic pop guru”, makes a return with single ‘Alchemy Hand’, to be released digitally through Reckless Yes on 4 April 2022 and news of an EP of the same name due in June.

Following on from 2021 EP ‘Astral Spectra’, single ‘Alchemy Hand’ draws deeper on occult and spiritual imagery through the lyrics, while building rhythm-punctuated yet woozy alt-rock melodies. A through-the-looking-glass dream, the track serves equal parts wonder and apprehension, circling rhythms and melody drawing you onward in a welcome but reverent trance.

Labelled the ‘indie Dolly Parton’ Piney Gir said of the single ‘Alchemy Hand’, “I’m always looking for magic in nature and everyday life. I love how the Hand of Mysteries (aka Alchemy Hand) symbolises a recipe using the primes of alchemy: sulphur, mercury and salt. Legend has it that these elements combined will transform lead into gold and man into god.

“I don’t take that literally but combining these elements may manifest an affinity with the divine and spiritual riches if you put that intention out there. The union of these energies creates a stronger sense of togetherness, sparks a feeling of connection and that gives me hope.”

Born in a thunderstorm, raised mainly in Kansas City in a strict religious household, Piney Gir knows a lot about duality – from being the model student by day to a secret ‘Laura Palmer’-esque figure by night, and from her Pentecostal upbringing to following the Grateful Dead around on tour in the ‘90s. A multi-instrumentalist with classical training she relocated to London to escape her smalltown scene, and soon joined synth pop duo Vic Twenty before starting her solo career.

As Piney Gir she has released seven solo albums starting with 2004’s Peakahokahoo (Truck Records), through Geronimo! and mR. hYDE’S wILD rIDE (Damaged Goods Records), and You Are Here through her own label STRS. In 2021 she released EP Astral Spectra via Reckless Yes.

Piney has toured the UK, Europe and America extensively, singing with Gaz Coombes and also Noel Gallagher. On tour she has supported Gaz Coombes, Ride, The Hidden Cameras, The Research, The Brian Jonestown Massacre, The Magic Numbers, The 5678’s, Wanda Jackson, Garth Hudson and more. She’s played a lot of the major festivals from South By Southwest to Glastonbury and is a darling of the BBC and NPR. Her music has been showcased in feature films and award-winning TV shows.