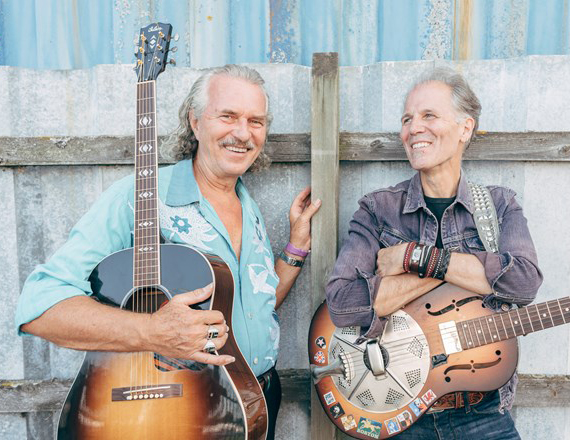 Hans Theessink & Brooks Williams
‘Steady Rolling Blues’ Tour
Sunday 6th May, 7.30pm. £12adv
Tickets are £12 in advance (more on the door) and available from the venue in person or online via See Tickets.

Hans Theessink, is one of the fiercest acoustic players in Europe and one of the top acoustic blues stars worldwide, a man who has played with the best and is one of the best, American or European, black & white, old and young, since The 1960s. This guy is the real deal, just a bluesmaster who is as good as it gets on every level. He is literally an international blues treasure.

“One Helluva Guitar Player”
Bo Diddley
“Hans Theessink is an international blues treasure. He is one of the world’s pre-eminent pickers and his warm baritone expresses blues”
Blues Revue, USA
“Hardly anyone gets everything so relaxed and focused on the point … ”
Bluesnews
“Mr.Theessink sings the blues with a voice the texture of black molasses and plays guitar as if he were born to it. The overall feel of the music is devastating”
The Living Tradition, UK

Brooks Williams hails from Statesboro, Georgia, the town made famous by country-blues legend Blind Willie McTell. Ranked in the Top 100 Acoustic Guitarists, he’s a mean finger-picker and a stunning slide guitarist. Plus, “he has a beautiful voice,” says AmericanaUK, “that you just melt into.” Not one easy to pigeon-hole, Brooks’ music is the love-child of country-blues and Americana. fRoots says, “Soulful Americana, full-on blues and tasty rootsy grooves. He really rocks!”

He got his start in the clubs and bars in Boston USA (the same music scene that years earlier sparked the careers of Bonnie Raitt and Chris Smither) and from there he has toured in ever-widening circles for nearly three decades. In 2013 Williams was nominated best male vocalist by the UK’s foremost roots-music mavens, Spiral Earth. AmericanaUK says, “he has a beautiful voice that you just melt into.” He’s also ranked in the Top 100 Acoustic Guitarists. Over the years he has picked alongside Taj Mahal, John Hammond, Paul Jones, Little Feat, Maria Muldaur, Shawn Colvin and Leo Kottke, to name but a few.

His massive repertoire reads like a roots music Hall Of Fame. Classic blues ranging from Bessie Smith to Memphis Slim, to compelling covers from the likes of Dave Alvin, Buddy Miller and Mose Allison “On top of all this,” writes American Roots UK, “is his songwriting which stands comparison with virtually any of his peers.” Rooted in tradition his songs are timeless. Utterly contemporary they are wryly observed and relevant.

With twenty-two albums to his name, including “Brooks’ Blues” (2017), “My Turn Now” (2016) and “Shreveport Sessions” (2014), and a vigorous touring schedule, Williams is one of acoustic roots music’s guiding lights. From festival stages to listening rooms, from Newport to Philly, Boston to Glasgow, Cambridge to Belfast, London to Detroit, Brooks Williams is, says the San Antonio Light, “a fret monster who has to be seen to be believed!”

“At the top of his game, setting new standards and a fresh direction for the blues.”
Blues In Britain
“Soulful Americana, full-on blues, and tasty rootsy grooves.”
fRoots

Hans Theessink & Brooks Williams
‘Steady Rolling Blues’ Tour
Sunday 6th May, 7.30pm. £12adv
Tickets are £12 in advance (more on the door) and available from the venue in person or online via See Tickets.