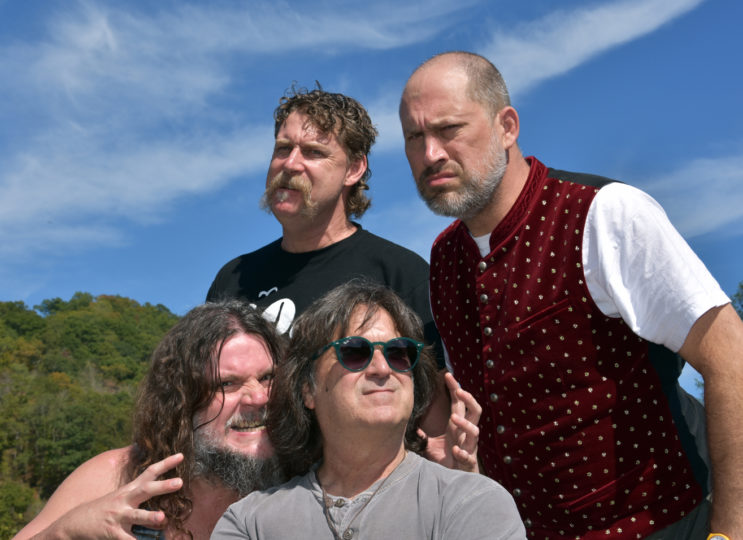 Hayseed Dixie
The Jokers
Wednesday 8th December, 7.30pm
Tickets are £18.50 in advance (more on the door) and are available online via See Tickets.

**This show is rescheduled due to the COVID-19 outbreak. All tickets purchased for the original date will remain valid but refunds are also available from your point of purchase.**

‘Folks!
We have waited until the last possible minute to make this decision because we really do want to play live again for you all. However, due to continued uncertainty and instability regarding international travel, potential entry and quarantine requirements, and ongoing health and safety concerns regarding this pandemic, we have been forced to reschedule our upcoming July shows to early December. The Castleton show is unable to be moved to December so a new date will be announced as soon as possible. We remain hopeful that the situation will have stabilised by October and that our Fall UK and Ireland tour will be able to go ahead as currently scheduled.
Everyone stay safe and sane.’

Hayseed Dixie began one innocent Summer day in 2000 when John Wheeler and Mike Daly drank roughly enough whiskey to float a battleship from the Florida Coast over to Portugal and back and decided to play around in John’s studio. Having spent the previous few years touring around with assorted country hat-acts, John had assembled a proper pile of recording equipment. Thus when he and Mike discovered in their drunken epiphany that the Lost Highway of Reverend Hank Williams and the Highway to Hell of Bishop Bon Scott were indeed the same identical stretch of tarmac, they were well and truly prepared to document this revelation in situ.

East Nashville, Tennessee in the Summer of 2000 was a proper Bohemian party place, and a few friends stopped by, drank some of John’s whiskey, and played and sang on this recording here and there, as was the custom of the times. And ten AC/DC songs were suddenly reimagined and recorded forever anew, entirely reinvented as Appalachian Mountain hillbilly rave-ups. Everyone danced (oh how they danced!) around the studio room and out onto the porch and drank more whiskey. (You should have been there. Really. You should have.)

Now, functioning well as “Exhibit A” in the demonstration of how one’s beginnings rarely know one’s ends, Hayseed Dixie have evolved into a proper force, one that most people either love, hate, or have never heard of. There isn’t really any middle ground, nor should there be. But fourteen albums – consisting of both original material and reinterpretations of previously rendered songs – and global physical *sales in excess of half a million copies, with over 1,200 live shows in 31 different countries testify: Hayseed Dixie are the undisputed creators of the musical genre, Rockgrass. There are many copycats, converts, and disciples out there. Accept no imitations.

And now, holding up their own idiosyncratic mirror to an unsettled and unsettling 2017, Hayseed Dixie offer up their 15th studio album, a collection of both original songs and reinterpretations of R&B and Soul classics. Dance with them as they probe the queries: “Why do we still believe there is such a thing as ‘race’?” “Are concepts like ‘nations’ and ‘nationality’ really useful to people who lay bricks or perform kidney stone surgeries?” and “Why does every song always sound better with a banjo in the mix?” The boys are seeking after the root core categorical commonality that runs like an eternal golden braid throughout all of humanity. Then they will buy it a drink!

Free Your Mind And Your Grass Will Follow was released worldwide on April 14th on Hayseed Dixie Records.

‘The Hayseed’s berserk hedonism is indeed refreshing!’
***** The Guardian

‘Hayseed Dixie highlights the worth of mountain music to all things rock: energy, dirt-punk rhythm, careening harmonies and the fundamental right of all no-good fuck-ups to raise hell come Saturday night.’
Uncut

‘Superlative musicians with a deep love and understanding of the dynamics of both modern rock and ancient hillbilly music.’
The Times

‘I enjoyed this and…on further investigation…it’s not good…it’s fabulous!’
Brian May, Queen

‘This is great! I can’t wait to get the royalty check!’
Gene Simmons, KISS

Hayseed Dixie
The Jokers
Wednesday 8th December, 7.30pm
Tickets are £18.50 in advance (more on the door) and are available online via See Tickets.