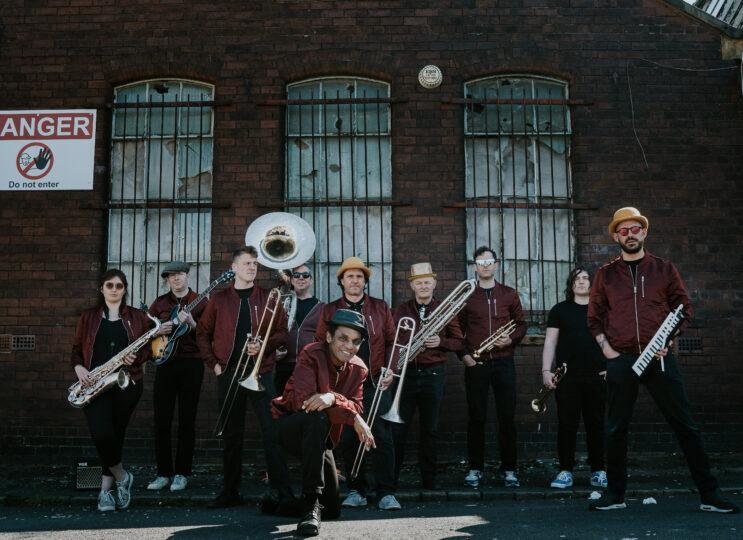 With their transglobal rhythms, beefy dual bass (provided by sousaphone and contrabass clarinet), blistering solos and sci-fi theme, Intergalactic Brasstronauts are far from your typical brass band. This 12-piece outfit from Yorkshire, UK draw on a wide range influences including dub, reggae, jazz and electronica. Their debut album Music For The People, released on 16 July 2021, had support from Arts Council England and has been described as “perfect” by Craig Charles (BBC 6Music) and “highly recommended” by Dennis Bovell (Soho Radio).

The band is the brainchild of producer and composer Sam Thornton, a.k.a. King Zepha, and he called on the mighty New York Brass Band (regulars at Glastonbury, Cork Jazz Festival & Rio Carnival) to provide the horsepower. However, since the project was conceived in the deepest, darkest months of the Covid-19 pandemic, live shows were not immediately possible. Instead, the band took to YouTube, creating a parallel reality in a series of weekly videos leading up to their debut release. Here they described their arrival on a deserted Planet Earth, their discovery of a bunker full of strange conical, mechanical, and electronic instruments left behind by the enigmatic human race, and their quest to recreate and preserve the phenomena that humans called “music”.