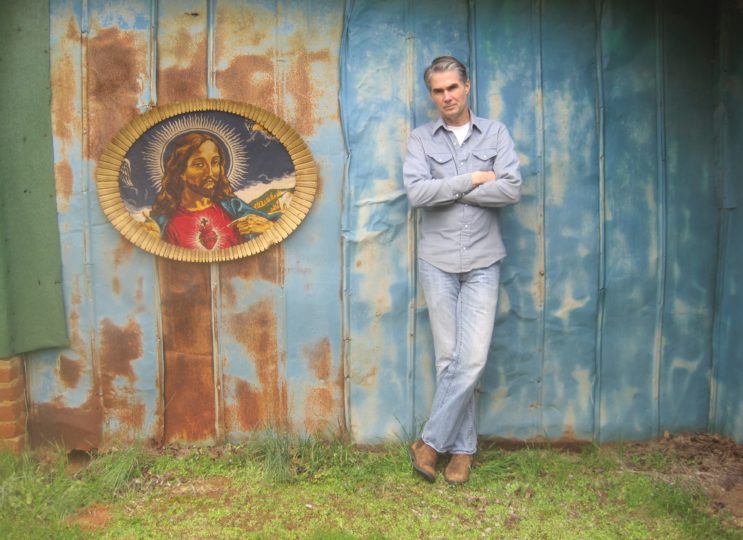 Jim White
w/ Clive Barnes
Thursday 6th September, 7.30pm
Tickets are £8 in advance (more on the door) and available from the venue in person, from our friends at Earworm Records or online via See Tickets.

Jim White gets around. When he’s not releasing his own critically acclaimed solo albums he splits his time producing records for other songwriters, exhibiting his visual art in galleries and museums across the USA & Europe and publishing award winning fiction.

Prior to Waffles, Triangles & Jesus, White released five eclectic, totally uncatagorisable albums plus another six even stranger side projects. Numerous songs from his back catalog have appeared both in film and television, with his Primus-esque Word-Mule being featured in Breaking Bad, and more recently his cautionary rocker Crash Into The Sun appearing Ray McKinnon’s highly praised Sundance Channel series Rectify.

White is presently at work completing a memoir, Incidental Contact, based on a series of uncanny coincidences that befell him during his days driving that taxi in New York City. Two chapters of Incidental Contact, The Bottom and Superwhite, have been published in the literary music journal Radio Silence, with Superwhite being awarded a Pushcart Prize for short fiction. White was a pro surfer. He served as literary commentator for the National Endowment of the Arts. He was a European fashion model. Samuel Beckett once played a practical joke on him. There’s lots more non linear information that doesn’t really fit the usual bio format. But that’s Jim—he gets around.

‘Jim White brings a diverse wealth of worldliness to his arcane observations, which on Waffles, Triangles & Jesus finds familiar Americana tropes and sounds given his distinctive twist.’
★★★★ – The Independent

‘White remains one of modern music’s most fascinating artists. A former dishwasher, landscaper, model, lifeguard, cook, surfboard laminator, road builder and taxi driver, White emerged alongside the nascent ’90s alt.country scene as someone making a sound entirely of his own. Across five albums – and his live shows – he’s built a reputation as a consumate storyteller with a DIY aesthetic and an outsider mentality.’
The Line Of Best Fit

Performing alongside Jim will be Clive Barnes:

Clive Barnes is world renowned guitarist, singer and songwriter of rare quality. He has released four studio albums to date the latest of which The Ghost Country garnered rave four and five star reviews with previous album Welcome To Farewell winning Album of the Year in US publication Acoustic Guitar. Clive tours consistently throughout the US and Europe as a solo act and also as guitarist with the likes of Eric Bibb, Joe Cocker and Taj Mahal. He has toured as opening act with Jeff Beck, Alison Krauss, Gary Clark Jr, David Crosby, Dr. John, Gregg Allman, Solomon Burke, The Blind Boys Of Alabama, Seasick Steve, Rodrigo Y Gabriela and many many more.

RTE’s Harry Guiren noted in a review of Clive Barnes performing at Vicar Street, Dublin, “Clive is a guitarist who can make one guitar sound like six. Barnes transported the entire, hushed venue across the Atlantic to where the paths taken by the Delta Blues, Tom Waits and Bruce Springsteen all led to his own special territory.”

Jim White
w/ Clive Barnes
Thursday 6th September, 7.30pm
Tickets are £8 in advance (more on the door) and available from the venue in person, from our friends at Earworm Records or online via See Tickets.