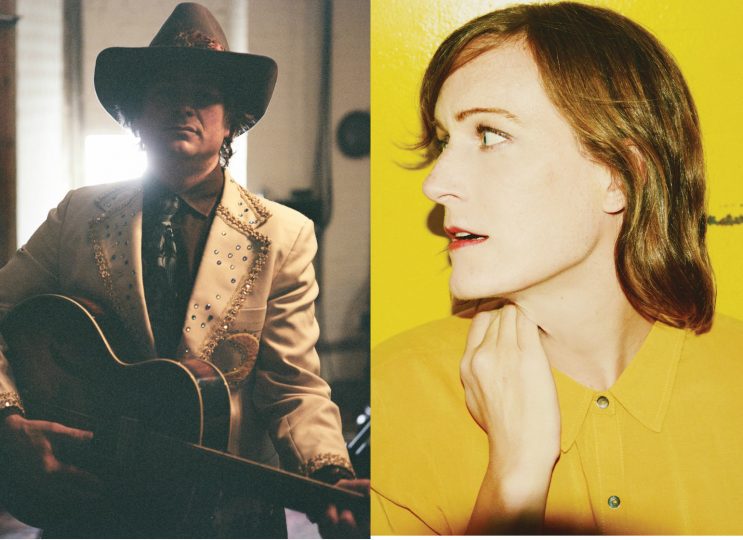 ‘A dark and glorious vision, reinterpreting Nashville country-soul hits from the ’60s and ’70s.’
**** Mojo Magazine

Karl Blau is a multi-instrumentalist, singer, and DIY icon who helped turn his hometown of Anacortes, Washington, into an indie-music mecca. He has released more than 40 records in 20-odd years, many self-released in handmade packaging and mailed to subscribers, and others on iconic indie Northwest labels K and knw-yr-own. Blau has also toured and recorded for years with Laura Veirs, the Microphones, Little Wings, D+, and Earth.

It all started with cutting a 7” single, a cover of the 1969 Tom T. Hall hit “That’s How I Got to Memphis”. Blau, whom Martine had come to know from sessions with Laura Veirs among others, asked if he could try singing it. “I knew what a special artist Karl was, but I had no idea what a powerful interpreter of songs he was,’ Martine says. The collaboration, pairing Blau’s deeply sonorous voice with Martine’s warm, modern arrangements, recast the Nashville hit in a new light.

The record, all covers, is a crate-digger’s feast of forgotten hits and deeper cuts; most of them from the Nashville country-soul renaissance in the late 1960s and early 70s – Tom T. Hall, Bobby Bond, Allen Reynolds. Other songs are from the Bee Gees (To Love Somebody), Link Wray (Fallin’ Rain), or Townes Van Zandt (If I Needed You). The project was a labor of love for Martine, the son of a Nashville songwriter who grew up listening to many of these songs.

Tucker Martine, known for his distinctive production work on music by My Morning Jacket, the Decemberists, and Laura Veirs, was first introduced to Blau’s early music by Veirs. “I was transfixed by Karl’s voice and completely absorbed by the world of sound he had created. I felt like I had been shown one of the great hidden treasures of music.”

‘Her best record to date…Gibson offers a cathartic tale of loss and redemption, set against a gorgeous sonic backdrop. She sounds newly confident, invigorated, and free.’
Pitchfork

Both literary and raw, with a love of a traditional folk music and a bent towards experimentation, multi-instrumentalist/singer-songwriter Laura Gibson has toured four continents, and is a frequent collaborator. She just recently received an MFA in Fiction Writing from Hunter College, while working on her forth release, the wise and vulnerable “Empire Builder”, which Pitchfork called her best record to date.  Laura recently collaborated with French artist The Avener on the single “You Belong”, featured in a worldwide ad campaign for Zadig & Voltaire.