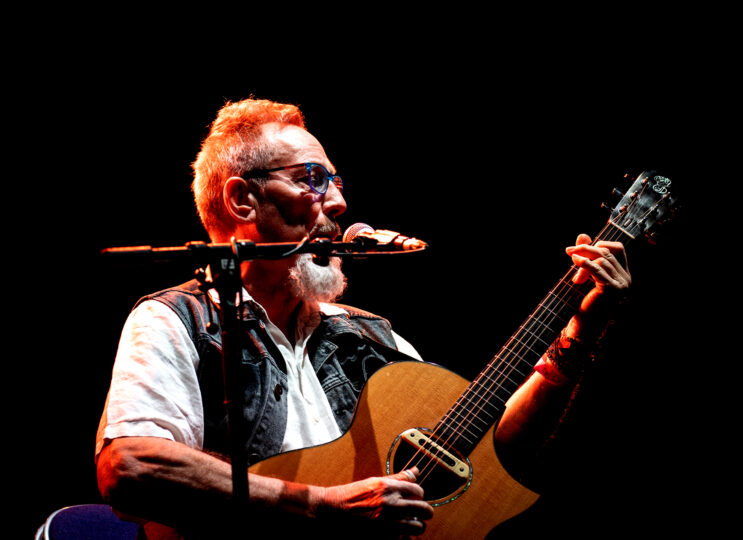 Throughout the seventies he recorded four more albums ‘Fable of the Wings’, ‘Pigmy’, Brighter Day’ and ‘Stories From the Human Zoo’ while touring with and supporting acts like The Who, King Crimson, Ten Years After, Frank Zappa and Roxy Music

In January 2003 Keith released his first instrumental CD, ‘acoustica’ – the opening track was used on the BBC documentary ‘Hidden Gardens’

In June 2015, Keith took some time out in France and started writing again. Two weeks later and seven songs started, he came back to England and finished the album that would become ‘Crazy Dancing Days’ in 10 months. Since then, early versions of 8 songs that were posted on YouTube, SoundCloud and Fandalism have been played over 47,000 times, 14,000 of them an appeal for tolerance to refugees, ‘Cross the Water’.

A legendary live performer he has had a resurgence in popularity since ‘Crazy Dancing Days’ was released in late December 2016 and 2019’s ‘Life,Life’, recorded and mastered at Sambourne House took his writing to another level and was described in December 2019 as “the year’s finest acoustic release to date” (Shindig, 5 stars).

He is currently writing his next album which is scheduled for a major label release later in the year.

‘Keith Christmas has a sit-up-and-listen voice that has got a lovely life-given gruffness to it. It is instantly recognisable but also capable of great emotional range and sensitivity. He is also an exceptional guitarist with a technique that has echoes of folk and blues styles from the folk revival days, but is also very distinctive and unique. This is a spirit-lifting album, performed with passion and absolute commitment, that confronts profound and serious themes with optimism, humour and hope. There is introspection without naval-gazing, and reflection and commentary without any cynicism or world-weariness.
Beautiful.’
Fatea Magazine

‘The end result is is the year’s finest acoustic release to date.’
5/5 – Shindig Magazine

‘With impeccable singing and solo acoustic guitar, the dozen songs here tell of longing and loving set within the shifting identity of a changing Britain.’
4/5 – Mojo Magazine