The Howl & The Hum – Live At York Minster – *LIVE STREAM* 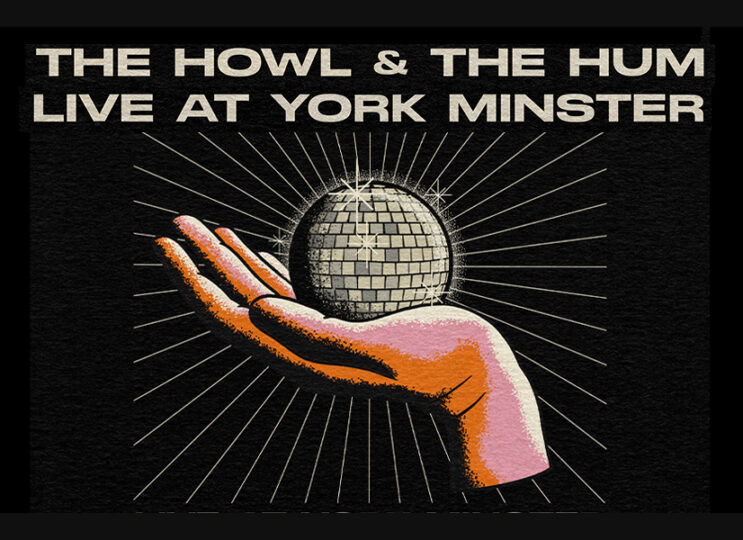 Please Please You, The Crescent & Brudenell Presents in partnership with The Chapter Of York
The Howl & The Hum – Live At York Minster
Tuesday 25th May, 8pm
Tickets for this live stream are available now via TicketCo.

We’re delighted to be involved in bringing you a one-off live performance with ​alternative rock outfit​ The Howl & The Hum​. As many of you will know this band are incredibly special to us, they’ve grown with us over the last five years and we’re very proud to be partnering on this special event.

Depending on COVID-19 restrictions at the time, there may be a​ very limited socially distanced audience​ able to attend the show, updates on this will be delivered ​exclusively via the band’s mailing list​.

“Brimming with cautionary one liners, seductive riffs and stylish synth beats, from the offset, the album unravels in beautiful glimmers of vulnerability, loneliness and nostalgia’
The Line Of Best Fit

The Howl & The Hum

With York’s local open mic and poetry scene for a catalyst, The Howl & The Hum emerge as an​ alternative quartet blurring the boundaries between indie pop and alternative rock​. From ruminating on the importance of ‘Human Contact’ to spending amber-hued evenings pondering what it would truly be like to be a shark, through vivid storytelling, The Howl & The Hum effortlessly construct their own peculiar soundscape fit for any cinematic soundtrack.

Last March saw the release of the band’s rather ironically named ​debut album ​Human Contact​ ​and the announcement of their ​headline tour (re)scheduled to take place from September 2021​.

Tickets can be purchased here​.

Determined to broaden the scope of guitar music, the band’s inspirations range from Leonard Cohen and Phoebe Bridgers to Lizzo and Kendrick Lamar. The band have also been compared to the likes of Massive Attack, Radiohead and Alt-J throughout their range of press plaudits by ​Wonderland Mag, Clash, The Line Of Best Fit, Dork, DIY, NME, The Times, The Guardian​ + ​many more​.

Since their formation back in 2016, The Howl and The Hum have been championed by tastemakers at ​Radio 1 ​(​Huw Stephens,​ ​Anne Mac’s New Names​ & ​BBC Introducing Track Of The Week​), ​6Music​ (Tom Robinson and Steve Lamacq) and ​Radio X (​X-Posure Playlist + John Kennedy). The band also played Radio 1’s ​BBC Biggest Weekend in Swansea (BBC Intro Stage) in 2018 & ​SXSW​’s BBC Introducing Stage in 2019 with Sam Fender, Georgia & Grace Carter. The Howl and The Hum have further cut their teeth playing a string of impressive festival dates including SXSW, The Great Escape Festival, Citadel Festival​ and ​Deer Shed Festival.

Please Please You, The Crescent & Brudenell Presents in partnership with The Chapter Of York
The Howl & The Hum – Live At York Minster
Tuesday 25th May, 8pm
Tickets for this live stream are available now via TicketCo.