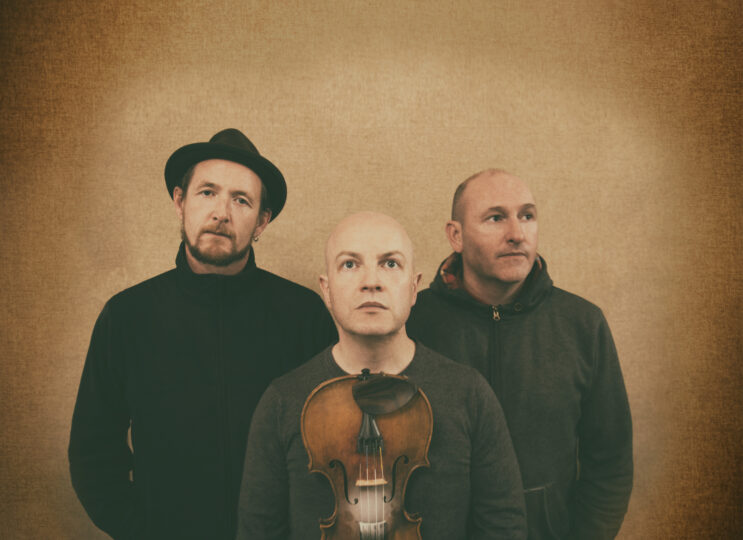 *THIS IS A FULLY SEATED SHOW WITH ALL SEATING UNRESERVED*

Folk music’s legendary triumvirate of musical magpies Mike McGoldrick, John Doyle and John McCusker are out on the road again in 2021. As winter turns to spring Mike, John & John will wrap up their stint on Transatlantic Sessions for another year and bring you their own blend of top class folk songs, tunes and charming bonhomie.

With their recently released album, ‘The Wishing Tree’ this will be an evening to remember. Described as the masters of flute, fiddle, song and guitar they have worked with the biggest and brightest and bring you a night of beautifully crafted music. Having shared stages and recording studios with everyone from Bob Dylan and Mark Knopfler to Paul Weller, Joan Baez and Linda Thompson. Mike, John & John are a rare musical treat you’ll savour for a very long time.

“What an absolute pleasure to share in their warmth, intimacy and richly talented company”
Folking.com

John Doyle, John McCusker and Mike McGoldrick first crossed paths as teenagers. Quarter of a century later, the fired-up folk live-wires are set to celebrate their friendship, and musical kinship, with their first studio album, The Wishing Tree. A thrilling trip through traditional, contemporary and original jigs, reels, ballads and more, it sees them branch out musically, while tracing the roots of their tunes, and acquaintance. “We all left school early, at 16, or 17, to join different bands,” recalls McCusker of their early days. “We all met back then… we’ve grown up together, really.”

Although they’d bumped into each other over the years, all three really hit it off when they started playing as part of the BBC’s annual Transatlantic Sessions in 2007 . “That felt like it was a real coming together of the three of us,” McCusker says. “It’s always been really natural to play together, and as pals, it always
feels really natural to hang out. That’s how the idea of us doing this as a trio came about: after The Transatlantic Sessions, we didn’t want the fun and the music to stop. So we said, ‘Well, why don’t we just keep going?’”

And so they did. Doyle, McCusker and McGoldrick have performed as a trio since 2009. They released a live album in 2009, and continue to tour together regularly. “We try and keep it as fresh and exciting as we can,” McCusker says. “Live, we’ll often go onstage with no set-list, just to try and keep that energy up, that freshness. It’s about flying by the seat of your pants, about playing from the heart, about not over-thinking things. We wanted to approach this album in a similar way.”

Largely recorded in four days at Sight & Sound Dearne Valley, The Wishing Tree is, says McCusker, “A mixture of stuff we’ve been playing over our time together, brand new tunes, and traditional songs that go back hundreds of years.” In the liner notes, Doyle recalls learning ‘The Wicked Belfast Man’ from acclaimed singer and song collector Dan Milner. He also pays homage to one of the first songs he ever picked up (‘The Banks of the Bann’), while one of his own songs, ‘Burke and Hare’, explores the mythology of Edinburgh’s notorious villains – as cheerily interwoven with an old Auld Reekie nursery rhyme.

The title track, meanwhile, says McCusker, is a nod to nature, and family, and hope (all three discovered, coincidentally, that they had planted trees with their own young offspring). But it’s also a salute to upholding tradition while pushing things forward. “Even when you’re writing new tunes, you’re trying to keep the roots of something alive,” McCusker offers. “You’re trying to help it grow, by adding new tunes and songs. Hopefully maybe these new songs will inspire younger generations to pick up an instrument, and to play, and make music, the way we were inspired by older songs when we were young…”

All three retain their youthful excitement for making records and life on the road. “The whole thing’s great fun,” McCusker nods. “We have no agenda other than having a nice time and playing music. That’s the way we tour as well – we throw ourselves in a little car, instruments on our laps, and off we go. And the record? Well, I hope it’s the sound of three old friends, having a great time, making music together.”