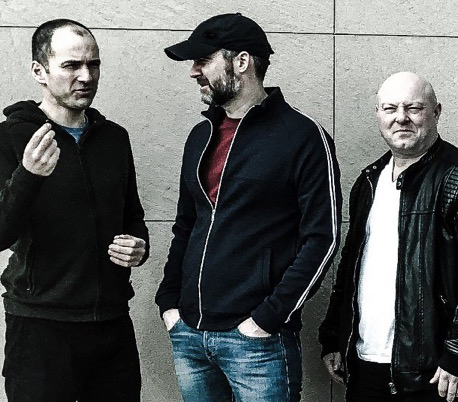 Ripley, Godson + Kitty VR
Friday 27th July, 7.30pm
Tickets are £5 in advance (more on the door) and available from the venue in person, from our friends at Earworm Records or online via See Tickets.

Formed back in 2015 RIPLEY, a three piece alternate rock band, was former classical guitarist Colin Elsworth’s attempt to come to terms with a neurologically caused injury that left him unable to continue to pursue a career as a solo performer. The result is a powerful, anthemic and emotional sound rooted in the tradition of classic rock, compositionally fused with a life-long love of Hollywood film scores, delivered with absolute conviction.

Lyrical meditations flirt with existentialist themes and soul probing postulations. The guitar work bristles with a coiled muscularity and the rhythm section is supple and crisp, yet energetic and powerful.

There are occasional stylistic nods to MUSE, especially with the sweeping arpeggiated keyboard percolations. Layered vocal performances recall the work of QUEEN, and, compositionally speaking, Elsworth makes use of his passion for classical film scoring drawing influences from the likes John Williams through to Philip Glass.

As is exemplified by the title track from the EP, Balance, RIPLEY is about what it is to find hope; to be reminded of the ever-present possibility of new beginnings.

The band Godson are a contemporary rock band formed in 2018 showing the diverse, and sometime heavier, range of singer/songwriter Pete Godson’s original material. Consisting of the high calibre musicians from York past.

Rob Murray: Guitarist (Liaison, DSQ)Their sound is a unique, hard and raw sound echoing Ton waits, Nick Cave, The Foo Fighters and Nivarna. Songs range from heavy driving songs to breakbeat littered epics to majestic ballads, all in celebration of the song. NOT TO BE MISSED.

Ripley, Godson + Kitty VR
Friday 27th July, 7.30pm
Tickets are £5 in advance (more on the door) and available from the venue in person, from our friends at Earworm Records or online via See Tickets.