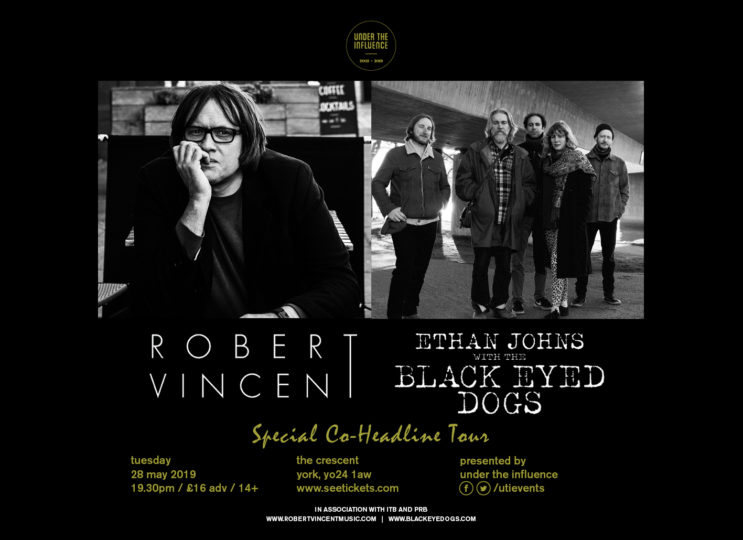 Robert Vincent
+ The Black Eyed Dogs
Tuesday 28th May, 7.30pm
Tickets are £16 in advance (more on the door) and are available from Earworm Records, the venue in person or online via See Tickets.

“He is the real deal”
Bob Harris OBE

Robert Vincent is an award-winning singer/songwriter from Liverpool – having received the inaugural Emerging Artist Award from “Whispering” Bob Harris in 2016 and UK Americana Music Association’s UK Album of The Year in 2018.

Seeing him play at the Bluebird Café’s Bluecoat event, the legendary broadcaster immediately invited Robert to record an Under The Apple Tree Session in his home studio and for his BBC Radio 2 “Country” show – describing him as “absolutely magnetic”.

Vincent credits his story-telling style of songwriting to his upbringing – where his formative years were spent listening to his father’s record collection including Emmylou Harris, Charlie Rich and Waylon Jennings, plus his older brother’s introduction to Pink Floyd.

In 2013, he released his debut album, Life In Easy Steps – with the title track receiving national airplay from Janice Long and Radcliffe & Maconie – and he’s subsequently toured the UK supporting Paul Carrack, James Blunt, Squeeze and The Pretenders at Royal Albert Hall. Recorded in his hometown and mixed in Nashville by Grammy Award-winning producer Ray Kennedy, his second full-length release I’ll Make The Most of My Sins sees him sited by The Guardian as one the UK’s top Americana artists.

Robert hit the road in Spring for Hearts of Glass Tour supporting Grammy nominated singer/songwriter Beth Nielsen Chapman and closed the show in style with his performance on The Old Grey Whistle Test: For One Night Only on BBC4 – which resulted in his album soaring to #1 in iTunes Country chart toppling Chris Stapleton off the top spot. For his follow-up album (due Spring 2019) he’ll be working with world renowned Brit Award-winning producer Ethan Johns (Ryan Adams, Paul McCartney, Ray LaMontagne).

A young man filled with dreams, regret and shocking talent, giving his all – now is his time
**** Mojo

“I was in some kind of mystic haze/Man I couldn’t see straight,” sings Ethan Johns on the meditative Jackie Lee, coming on like Bob Dylan after a heavy night of Holy Mountain and heartache. At once intensely personal but also asking the bigger, more esoteric questions that have followed Johns since his youth, Anamnesis isn’t like most folk rock records. But then again, most folk rock records aren’t informed by an obscure text from 1616 about spiritual transformation. Ethan Johns’ first album since 2015’s ‘Silver Liner’, the musical polymath’s latest release is a whirlwind of a thing, a magical coming together of people and of ideas, taking as its starting the Chymical Wedding of Christian Rosenkreutz. “It’s basically the alchemists bible,” explains Johns, matter-of-factly. “What it does is talk about the true nature of alchemy – which is the transformation of the soul, not about the transformation of base metal into gold.” It’s this spiritual journey which runs deep throughout Anamnesis, which also draws inspiration from the works of magical thinkers – and personal heroes of Johns’ – Alejandro Jodorowsky and Philip K Dick. Anamnesis is different for another reason too. The album will only be available as a physical release, taking a stand against streaming culture and the disservice it does to artists who are trying to make living from their music.

The album begins, like many things do, with The Invitation, a swirling Hawkwind-esque instrumental and ends with The Wedding, skipping through a world of magic and mystery in-between. Recorded in the barn at the bottom of his garden over two weeks in the depths of last winter, Johns fourth LP sees him reunited with his long-standing band, who came together for what he calls “legitimately one of the best times I’ve ever had making a record.” Though he might be an acclaimed, Brit Award winning producer, he handed over the reigns to the collective when it came to fine turning the album in the studio. “Everybody had a vital part to play,” he explains. “I was blown away by the sense of community.” Even his wife, who is lovingly credited as ‘den mother’ on the album sleeve, stepped in to lend a hand.

Amongst the mysticism of Anamnesis – a word which Johns defines as “the loss of forgetfulness. I just love that idea – you can think about that forever!” – is a very real, grounded kind of storytelling. Here you’ll find delicate, Townes Van Zandt-esque fiddle-laden tales of full moons and fireflies (The Road To Ever More), chugging recollections of riding the lightning (Runaway Train) and dreamy remembering’s of moody pool halls and East LA (Lost In Time). Now for a man based in the wilds of Wiltshire, Johns’ lyrical fascination with Americana might at first seem at odds with his current situation, but it all makes perfect sense really. This is a man who’s spent nigh on half his life in America, first traveling to California at just three months old and then living there for almost 20 years from the age of 17. So the fact that at times he sounds like Richard Thompson fronting The Band – which he truly, brilliantly does – should come as no surprise. The Grateful Dead are another US act whose presence can be felt throughout the album’s 15 tracks, notably their rather un-Grateful Dead-sounding 1974 album From The Mars Hotel. “I’ve been into the dead since I was 14,” says Johns, “but there’s such a huge body of work there that I completely overlooked it.” It became a cornerstone of Anamnesis though, with Johns playing it to his band repeatedly. “It just blew my mind and I got a bit obsessed by it. It really knocked me sideways.” Anamnesis then, is where classic British folk meets the sound of wandering American troubadours with a healthy dose of inspiration from the unknown.

Robert Vincent
+ The Black Eyed Dogs
Tuesday 28th May, 7.30pm
Tickets are £16 in advance (more on the door) and are available from Earworm Records, the venue in person or online via See Tickets.