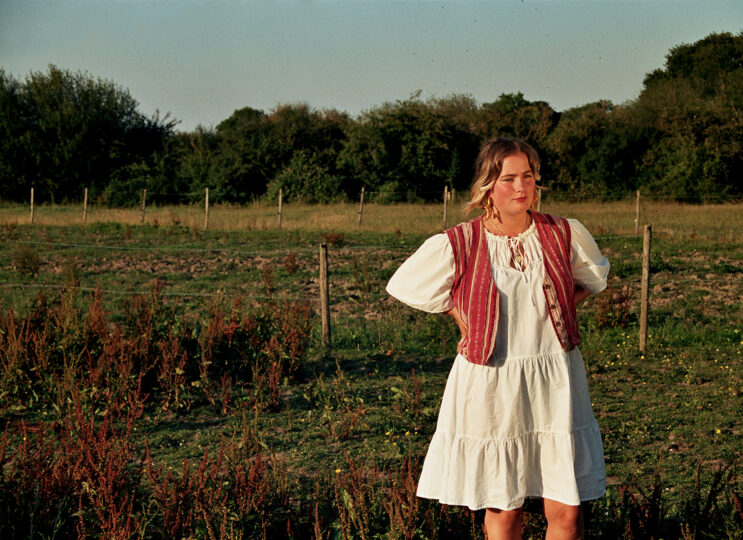 It isn’t especially obvious which year you fell asleep in, nor which one you’re moving through in dreamland, but two things are for sure: you’re definitely asleep, and you definitely won’t be getting much further in this beat up, broken down Mustang. You’ve seen enough low-rent Westerns to know that a swing-doored, spit-and-sawdust bar waits for you somewhere off in the shimmering heat lines of the horizon. Inside, a sublime voice — stardust and moonshine, perhaps pressed into the wax five decades ago, or perhaps only last week — wafts from a jukebox grille, regaling you with tales of tight hearts, needles in haystacks, cloudy night skies, minor miracles, rodeo kings and bolted horses. You don’t know it yet, but the orator of these tales is Katy J Pearson, and the songs which soundtrack your hazy, slumber-induced solitude are those of her debut album, Return.

Back in the realm of the roused, Return symbolises the re-entry of Pearson into music-making after a previous, collaborative project with her brother fell foul of the pressures of a major label record deal. “I didn’t write for about seven months”, Pearson reflects. “I was just like nope, I’m gunna become a gardener, this isn’t happening. Return is about the whole experience of beginning to enjoy writing again, really”. Over the course of two-and-a-half years, between her parents’ house in Gloucestershire, her Bristol bedroom, and nearby community arts space The Island, Pearson honed her craft as a solo artist, learning to rely on her creative instincts, and bringing forth an album just as shaped by the South-West of England as the rich musical history of America’s Southern States. Consequently, she says, “these are the most honest and proper songs I’ve written; songs that have come from my own being, rather than a room with a guy prodding me to tell a traumatic story of my life and then write about it”.

The songs were strengthened and evolved in a live setting — including in support of Olden Yolk and Cass McCombs on their respective UK and European tours — before being taken to the studio of producer Ali Chant (PJ Harvey, M. Ward, Perfume Genius, Gruff Rhys), where they were captured in their final form. The result is a jewel in the dirt by the side of the highway; ten songs which slide effortlessly between lovelorn country, lo-fi folk and glistening, unforgettable pop.

Wheedling strings and warm brass herald album opener ‘Tonight’, a classic tale of girl-meets-boy-on-the-dancefloor. Sleek, country-inflected ballads (‘Beautiful Soul’, ‘Hey You’, ‘Something Real’) bleed into sparse acoustic heartwrenders like ‘Return’, which chronicles Pearson’s journey to the brink of her art and back again (I’ve been waiting to return, and tell you what I’ve learned…I’ve changed she sings, against backing vocals which boast all the quiet splendour of a Sufjan Stevens arrangement).

On ‘Miracle’, mechanical drum beats and synths are perfectly counterbalanced with baroque incidentals and pastoral imagery— think Stevie Nicks taking a dip in a West Country river — whilst on ‘Take Back the Radio’, Pearson basks in the sun in an open-top car, dashboard stereo blaring her triumphant return to the airwaves — subsequently a 4-week fixture on the playlist at BBC 6 Music. ‘On the Road’ is similarly celebratory of a fortune back on track, whilst album closer ‘Waiting for the Day’, a stripped-back, longing acoustic number, showcases the sheer beauty of Pearson’s voice, conjuring a campfireside recital under the stars. And nowhere is Pearson’s talent more sparkling than on lead single ‘Fix Me Up’ — an unbelievably hooky country-pop crescendo about wishing for salvation, but ultimately working things out on your own, written at the peak of her creative tumult. “When I wrote it, I thought: this feels special, and I’m normally extremely self-critical”, she says. “But with this one I was like woah, this is one of the best things I’ve written, ever. I didn’t wanna just throw it out when no-one would hear it — I’ve sat on it for three years basically, but it’s been worth the wait.”

And so, with the release of Return, the clouds are finally parting on a talent which has long nurtured itself in the grey. Katy J Pearson drives out from the murk on full beam: songwriter, guitarist, vocalist, and without doubt, the one behind the wheel.

‘An addictive whoop of pure joy’
The Guardian

‘One of the year’s truest talents’
Uncut Magazine

‘Katy manages to find humanity in every moment’
★★★★ DIY Magazine

‘Return is a road trip well worth taking’
★★★★ Mojo Magazine