She Drew The Gun + Annabel Allum + Marnie Glum – *SOLD OUT* 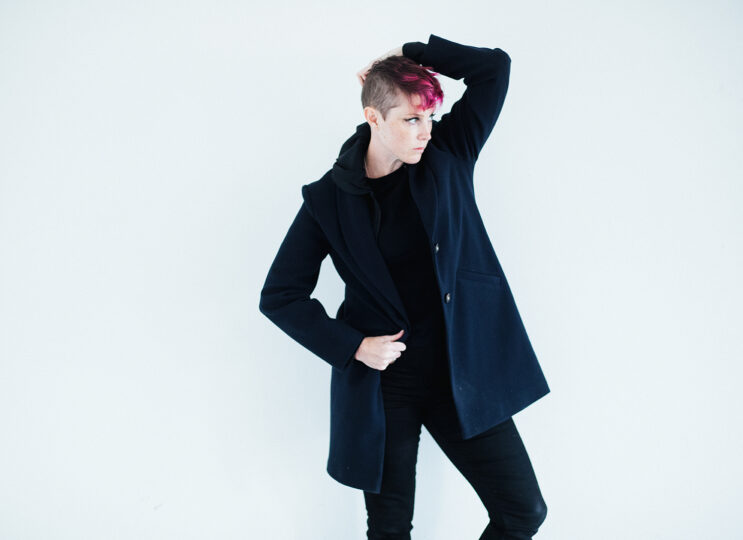 “I believe art should provoke a reaction.”

Passionate, principled, and refreshingly plain-spoken, Louisa Roach will not be cowed into silence. As She Drew The Gun, the Wirral-based singer-songwriter has spent the last seven years cementing her reputation as a vital voice in the alternative scene, using punk-infused psych-pop as a vehicle for exposing injustice and for advocating for a fairer and more tolerant society. That message is more potent than ever on Behave Myself, her incendiary third album due in September 2021.

Written during lockdown, and recorded with Ross Orton (Arctic Monkeys, The Fall, The Kills) at McCall Sound Studios in Sheffield, Behave Myself very much reflects the societal circumstances surrounding its creation, decrying corruption, abuse and the continued divide between rich and poor, all of which have only worsened during the pandemic. As Roach explains, “It’s become more important to me than ever to say something meaningful about what’s going on in the world and about the systems that we live in. And I think I can only write about issues like these, because I’ve experienced them.”

A proud socialist, feminist, bi-sexual and mother of one, Roach was born in Birkenhead and raised in a working class, single-parent family. With her mum forced to work weekends and evenings to pay the bills, Roach and her brother would often be taken care of by their nan, and it was through singing along to records with her that Roach first fell for country music. At the same time, she developed a love of Neil Young, Bob Dylan and The White Album, as well as 80s pop like Erasure and Soft Cell, via her father’s vinyl collection.

Roach’s own musical awakening came via Britpop, Oasis, Radiohead and Alanis Morissette, all of whom inspired her to teach herself guitar, picking up pointers from books and from older kids in the neighbourhood. Two days after her 13th birthday, Roach lost her nan, and she began leaning on guitar as an outlet for expression and as an escape from grief.

Though she played in bands at her local youth club, music never seemed a serious career option for Roach and – following a turbulent period in her late teens – she fell into a series of low-paid jobs before becoming pregnant at the age of 24. The birth of her son proved the catalyst for Roach to reevaluate her situation, empowering her to return to education as a mature student. She went on to complete a degree and a masters in Psychology in Liverpool.

It was while in Liverpool that Roach began writing music for the first time, initially as a way to process personal experiences. With encouragement from her girlfriend – her first – Roach began playing open mic nights and local shows, developing She Drew The Gun in 2014. By 2015, she was playing sessions for BBC Introducing in Merseyside, putting her on the radar of The Coral’s James Skelly, who promptly signed her to his label Skeleton Key. With Skelly as her mentor, Roach solidified her cosmic psych sound and expanded her set-up, recruiting Jack Turner on bass.

She Drew The Gun’s debut album – the Skelly-produced Memories Of The Future – arrived to acclaim in April 2016. Shortly after, they saw off more than 5000 competitors to win the Glastonbury emerging talent competition, and were rewarded with the opportunity to open the John Peel Stage at that year’s festival. Later in the summer, Roach played a series of rallies in support of Jeremy Corbyn’s prime ministerial bid, having been personally selected by the late-comedian/activist Jeremy Hardy.

Socialism has always been an integral part of Roach’s life, a belief system inherited not just from her father but her paternal great-grandfather, whose well-thumbed copies of Kropotkin’s ‘Mutual Aid’ and Marx’s ‘Das Kapital’ sit on her bookshelf today. Reflecting on the #JC4PM rallies, Roach cites Corbyn’s “hopeful politics” as being the motivation for her involvement. “I don’t think the policies were even that radical,” she shrugs. “It was a chance to start affecting positive change.”

In October 2018, She Drew The Gun released the follow-up to Memories Of The Future, Revolution Of The Mind. Once more produced by Skelly, and recorded at Liverpool’s Parr Street Studios, it found Roach expanding her horizons with a more eclectic set spanning from subdued folk to serrated post-punk, and further sharpening her thematic focus, inspired by lyricists like Malvina Reynolds and Kae Tempest. It was subsequently named one of 6Music’s Albums of the Year.

The much-anticipated follow-up, Behave Myself represents another giant leap forward for Roach. Drawing on Orton’s expertise with bands like Working Men’s Club, the synth-heavy set encompasses glittering, dystopian disco (‘Panopticon’), Chemical Brothers-inspired electronic-rock (‘Next On The List), spaced-out dream-pop (‘Roses Tale’) and frenetic, electro-flecked punk (‘Cut Me Down’), and features Roach’s most impactful melodies to date.

Lyrically too, this is Roach at her most impassioned. Retaining a vivid sense of lockdown-inspired claustrophobia, the record is scattered with references to cells, walls and bars, an idea of freedoms under threat that unites the entire set.

‘Next On The List’ catalogues the marginalised groups that conservatives have scapegoated as a threat to the status quo, from feminists and environmentalists to the trans community. ‘Class War’ is a searing indictment of political corruption, while ‘All Roads To Nowhere’ is a treatise on depression, self-medicating and the role of neoliberalism in affective disorders. ‘Cut Me Down’ takes inspiration from Las Tesis, the Chilean feminist performance piece protesting violence against women, and the title track takes a slogan from a radical feminist pamphlet (“I am the rage of all women condensed to the point of explosion”) and expands upon it with a series of non-conformist affirmations, from, “I am the silence of violation finally broken”, to “I’m the space for the rebel to revolt in”. Each of these is concluded with the rebuke to authority, “I will not behave myself.”

Ultimately, Behave Myself is an innately hopeful collection; a rallying cry for positive action. “This record is about asking ourselves, what kind of system do we want?” Roach explains. “Do we want women to be equal to men in the same system we have now? Or do we need to break this whole system and have one that works for women all over the world; one that’s anti-colonial, anti-imperial and truly intersectional? So it’s a demand for freedom.

“There’s this idea that we – as a society – don’t see our common condition properly and we behave ourselves and try to fit into the existing system instead of rebelling or pushing back enough. But it feels like people are becoming more aware of what’s going on, and we’re getting the wool pulled over our eyes less. And I can already see those little shoots of dissent. So this album’s there for people to grab hold of when they’re ready to explore that rebellious streak.”

Loaded with pulsating hooks and enigmatic tenacious vocals, Annabel Allum oozes charisma and showcases an adept ability to marry folk-style storytelling with snarling fuzzy indie. The Guildford-based singer-songwriter has been backed across tastemaker platforms as one of the most vitally sarcastic voices in the indie scene, with praise coming from key press voices in FADER, DIY and The Line of Best Fit as well as on the airwaves. ‘Beat the Birds’, taken from 2018’s ‘Sorry I’m Not Perceptible’ EP, found its place on the Radio 1 BBC Introducing Playlist and she earned herself a spot on the lineup of BBC Music’s The Biggest Weekend in Swansea. Huw Stephens is a vocal supporter of Annabel’s music and aired her live Maida Vale session.

Annabel has performed a number of prestigious slots, most notably supporting the iconic Beth Ditto across her UK/EU tour, as well as sharing the stage with Nadine Shah, Blaenavon and more. Sets at The Great Escape, Live at Leeds and the BBC stage at SXSW brought her to wider international attention, whilst fiery performances at Boardmasters, Siren Festival, Neverworld and Reading Festival in 2018 showcased her intent even further, as well as completing two UK headline tours.

It is clear that the artistic value of Annabel Allum is not limited to just one medium. Her original look and self-styling have also gained Annabel a lot of attention on social media, with an ever-growing Instagram following she has received endorsements from various well-known indie clothing brands for her to represent online. She has also organised and curated her very own ‘Perceptible Festival’, which she intends on scaling annually.

Please Please You & Brudenell Presents
She Drew The Gun
Annabel Allum
Saturday 26th February, 7.30pm
Tickets are £14 in advance (more on the door) and available online via See Tickets.