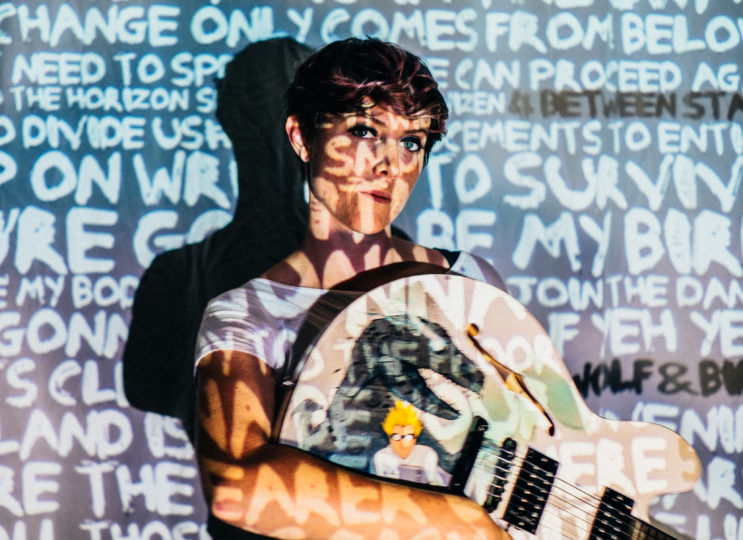 Louisa Roach isn’t a protest singer. The ambitious, melodic psych pop this Merseyside artist makes under the moniker She Drew The Gun is too abstract for that label, more dreamy than didactic. But it’s fair to say this rising star – winner of Glastonbury’s Emerging Talent contest in 2016 – works adjacent to that tradition, taking inspiration from the likes of underground folk legend Malvina Reynolds, and contemporary poets such as Kate Tempest and Manchester’s Toria Garbutt.

“I’ve always felt drawn to music that says something,” explains Roach, “music that goes beyond simple love songs. As a songwriter, you’ve got the whole spectrum of human experience to draw from; half of that is the bigger picture stuff.”

It’s mostly the latter that drives Roach’s music, from her promising 2016 debut, Memories of the Future [“Junkyard Scouse soul, built ingeniously on a Wirral council budget” ★★★★ Uncut] to her brilliant, forthcoming follow-up, Revolution of Mind, to be released October 5th on Skeleton Key Records. If there’s a central theme to this new record, says Roach, it’s liberation, in various guises: “Empowerment; resisting; arming yourself with knowledge; questioning the status quo, questioning your own state of mind and how it’s affected by the systems we live in…”

Listen to Revolution of Mind, with its melodic choruses and stream-of-consciousness style verses delivered in Roach’s cool, Scouse-inflected vocals, and it’s clear where She Drew The Gun hail from – spiritually and geographically. “I love 60s music and Psychedelia, I’ve also been inspired by Liverpool bands like The Coral, The La’s and The Lightning Seeds. I think we’re somewhere along that continuum.”

Roach – born, raised and currently residing on the Wirral – brings a queer feminist energy to this rather male-dominated lineage. She was an ‘80s kid, raised by a hard-working single-parent mother and loving nan in nearby Birkenhead. As a kid, Roach was tomboyish, a footie fan with a competitive streak. She started playing guitar at 13 and was soon performing Oasis covers at friends’ parties. Music was a hobby at that point, a bedroom passion that fell by the wayside as teenage life and, a little later, motherhood took over [Roach has a 12 year-old son].

Domestic life was never going to be enough for this would-be rebel bard, and eventually Roach returned to academia, moving to Liverpool to study Psychology as a mature student. It was during this period that she picked up the guitar again, studying by day and strumming by night, in part-time bands or moonlighting at open mic nights. “I felt really free after the move. I met my now-girlfriend [Roach’s first, serious, same-sex relationship] about a year later; some of the first songs I wrote were about her.”

With new love came a new confidence. Auspiciously, the handful of tracks she’d sent to the BBC were singled out by DJ David Monks, who immediately booked Roach for a live session. It was that session that put She Drew The Gun on James Skelly’s radar. Impressed with Roach’s brand of proudly regional upstart pop, The Coral man promptly signed her to his Skeleton Key label, helping to release her debut.

“I’ve learned a lot since I made Memories of the Future,” says Roach. “I’ve definitely grown as a songwriter; there’s more intention to the way I write now, more purpose.” It’s a quality that’s immediately obvious on the album’s thrumming, sure-shot opener, Resistor:

“All the underdogs, black sheep/Fighters of the powers that be/
In tenements, high rises/Freedom fighters, the outsiders…”

Roach has always been drawn to the Othered, from the outcast characters in the Irvine Welsh books she’d read as a teen, to the marginalised grafters and survivors of Theresa May’s food bank Britain. She sings from a place of kinship and empathy on songs like Something For The Pain and Between Stars. “I believe in questioning the rules and asking who they’re there to serve in the first place. I think some of that is down to being queer, and not conforming to rules around gender.”

Motherhood and higher education have also shaped Roach’s worldview. “Having my son meant I had to try and get my shit together. Before that I’d spent time out of work and in low-paid shit jobs that I hated. I think part of wanting to do Psychology was to understand myself, and the bouts of depression I have. I was interested in learning about the mind, but again, I was drawn to the outside, the critical psychology side which examines how, historically, psychology has tended to pathologise aspects of human behaviour in the service of dominant power structures. Studying this stuff really opened my eyes.”