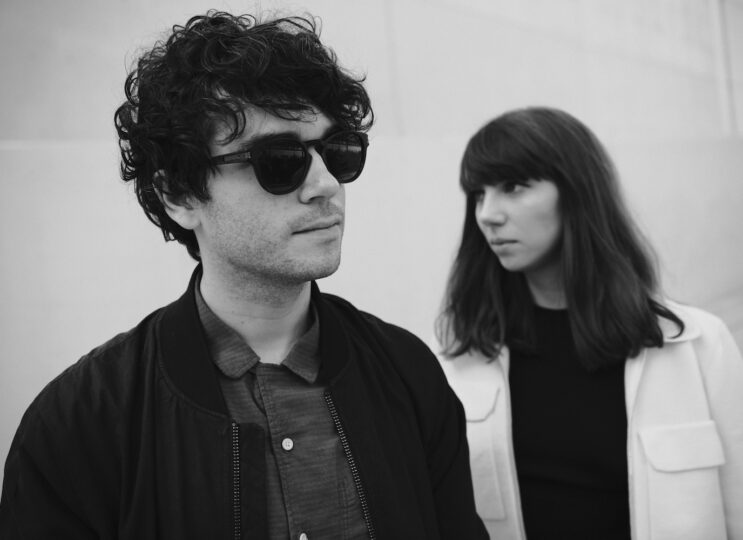 Ouroboros & Please Please You presents
The KVB
Wednesday 26th January, 7.30pm
Tickets for this show are £8 in advance (more on the door) and available from See Tickets.

Underground coldwave duo The KVB are back with their most potent and immediate record yet. Produced and mixed by Andy Savours (Black Country New Road, My Bloody Valentine, The Horrors) ‘Unity’ represents an exciting development in the band’s sonic journey and will be released on 26th November via Invada Records. Across the album’s ten songs, The KVB masterfully pull together all their trademark components; radiant guitars, textural synths and an ear for a moody, brooding melody all presented here with a renewed dynamism.

Alongside the announcement of their forthcoming album, The KVB are sharing the music video for their new single, ‘Unité’, which the duo explain is “a homage to our time living in Berlin, with the pounding kick drum and grinding electronics”. ‘Unité’ perfectly aligns the dark and light sensibilities of the album by lyrically referencing urbanisation, and a dystopian potential future wrapped up in a euphoric, rave-tinged groove.

The initial writing sessions for the new album ‘Unity’ took place in Spain in early 2019, where the duo found influence from “half built luxury villas, still unfinished from the crash in 2008. There was something eerie and beautiful about the desolate landscapes and concrete in the sunshine.” There has always been an element of dystopia through their sound, but now there is also more of a rapturous release.

Throughout the album lyrical themes combine double meanings and a sleight of hand is present; Le Corbousier’s brutalist ‘Unité d’habitation’ informs the title track and via the French-to-English translation ‘Unité’ becomes ‘Unity’ – a rallying cry to totality on the dancefloor. ‘Unbound’ is informed by the classic shoegaze stylings of Slowdive and Ride but also late-modern poet Keston Sutherland and the idea of recreating a special moment lost to the past.

Beginning with a blast of electronic drums, lead single ‘World on Fire’ instantly kicks in with a euphoric blend of guitars and synths beneath Nicholas Wood’s and Kat Day’s breathy-yet-powerful vocal duet. Current single ‘Unité’ is built around a pulsing synth arpeggio that wouldn’t sound out of place on Trans Europe Express, but is augmented by detached, deadpan vocals and dream-pop sonics.

Blending reverb-soaked shoegaze with minimalist electronic production, The KVB’s music reflected Nicholas Wood and Kat Day’s mastery of atmosphere even as their sound evolved over the course of the 2010s. Early releases such as 2012’s debut album, ‘Always Then’, dealt in brittle beats and sonic blasts that evoked Cabaret Voltaire and the Jesus and Mary Chain in equal measure, but the duo’s style became more streamlined and sharp-edged on later efforts such as 2018’s ‘Only Now Forever’.

Formed in 2010 by singer/songwriter/multi-instrumentalist Nicholas Wood as a solo project, The KVB got started with a number of limited cassette and vinyl releases before vocalist/keyboardist/visual artist Kat Day joined Wood in 2011. The band have released several critically acclaimed albums and EPs over the last decade before signing to Invada Records for their last album ‘Only Now Forever’.

Having toured extensively, the band have amassed fans far and wide including the U.S., China, Russia & Japan before lockdown offered an opportunity to relocate from Berlin to Manchester to work on new music.

Ouroboros & Please Please You presents
The KVB
Wednesday 26th January, 7.30pm
Tickets for this show are £8 in advance (more on the door) and available from See Tickets.