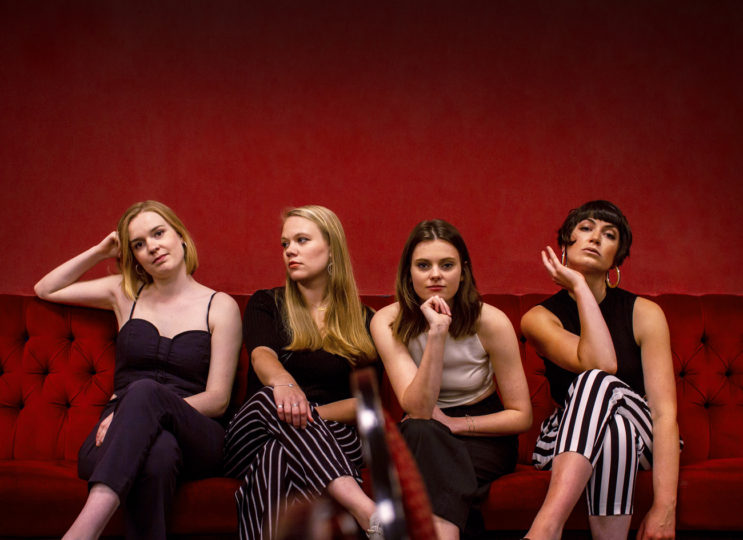 Please Please You presents
The Magpies
Saturday 7th March, 7.30pm
Tickets are £8 in advance (more on the door) and are available from Earworm Records, the venue in person or online via See Tickets.

York-based Polly Bolton (mandolin, banjo, vocals) first picked up the mandolin as a child and has been touring internationally in various line ups since her early teens. She has performed at festivals including Wilderness, Boomtown Fair, Deer Shed, Festa do Avante! (Portugal), Beverley Folk Festival, Musicport, Towersey and Broadstairs Folk Week, as well as slots with Tcha Limberger & Mozes Rosenberg, LAU and Hot Club of Cowtown. Polly is endorsed by Eastman™ (www.eastmanguitars.com).

The Magpies formed in their hometown of York in the autumn of 2017. Initially a duo project between Bella Gaffney and Polly Bolton, 2018 saw the lineup expand to a quartet, with the original pair joining forces with acclaimed cellist Sarah Smout and fiddle ace Holly Brandon.

Based on a deeply felt musical friendship, they work collaboratively, arranging material led by powerful vocals and glittering instrumental ornamentation. They each draw on their transatlantic influences to create a unique blend of Celtic and bluegrass folk, transporting audiences to distant lands and capturing imaginations with their enthralling live show.

Over the summer of 2018 they were exceptionally well received, performing at festivals such as Cambridge Folk Festival, main stage at Wickham Festival, Towersey Festival, Deer Shed Festival, Grassington and a sold out EP release show at The Great Yorkshire Fringe. The first transatlantic trip for the band took place in February 2019, when they performed at Folk Alliance International in Montreal.

The summer will see them perform at many festivals including Glastonbury, Larmer Tree, Warwick, Costa del Folk, and Shambala, whilst recording their debut full band album for release in early 2020.

“A natural chemistry… all three voices blend and harmonise beautifully… the mix of styles offers so much promise.” Folk Radio UK

Please Please You presents
The Magpies
Saturday 7th March, 7.30pm
Tickets are £8 in advance (more on the door) and are available from Earworm Records, the venue in person or online via See Tickets.