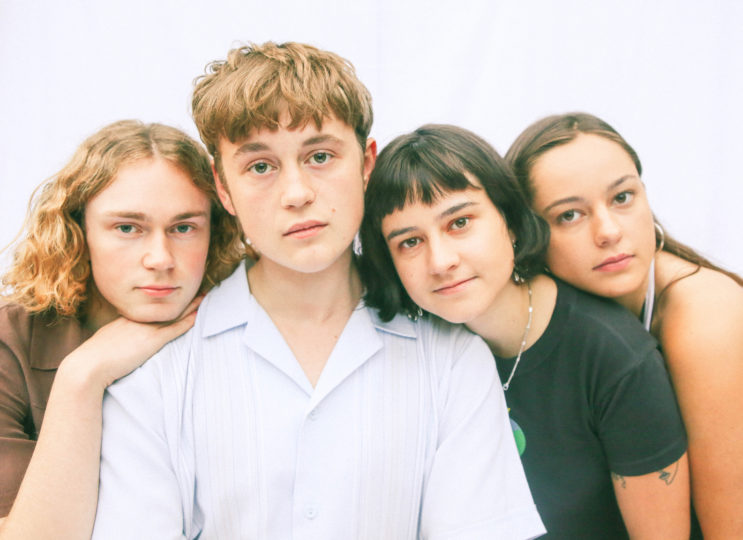 The Orielles
LYLO + Bull
Tuesday 26th February, 7.30pm
Tickets are £10 in advance (more on the door) and available from the venue in person, from our friends at Earworm Records or online via See Tickets.

2018 has been some year for The Orielles. Having started it as one of the most talked about new band’s in the U.K. thanks to a salvo of singles the previous year for Heavenly Recordings – Sugar Tastes Like Salt, I Only Bought It For The Bottle and Let Your Dogtooth Grow – 2018 saw them deliver on the hype thanks to a much acclaimed debut album, Silver Dollar Moment in February and their breathtaking live show which saw them sell-out increasingly large venues across the U.K and play festivals from Latitude to Camp Bestival and End of the Road.

Made up of sisters Sidonie B and Esmé Dee Hand Halford and their best friend Henry Carlyle Wade, they grabbed attention thanks to the spatial-funk of their album that in part recalled both ESG and fellow north-west pioneers A Certain Ratio and marked them out as a band willing and able to explore the more interesting musical corners.

And now, having recruited a new member, Alex Stephens, on keyboards, they return with two stunning new tracks to show how far they’ve come – Bobbi’s Second World is the young sound of West Yorkshire filtered via Lagos while their Peggy Gou cover, It Makes You Forget (itgehane) is testament to the ease with which they are able to musically take on anything and make it their own. To coincide, the band has also announced a number of new tour dates.

Talking about the tacks, the band said:

Bobbi’s Second World, written with the addition of a new member on keys, exhibits an explosion of new sounds and ideas that came to fruition after a long summer of playing festivals and taking inspiration from music that made us dance. It centres around the story of a cat named Bobbi who, in order to become a lady, has to experience the extremities of two complex and differing realities- situated in her front and back gardens respectively. The eccentric instrumentation, influenced by northern soul, post-punk and funk music, matches the quirkiness of the lyrics to create a song that concerns a young cats maturity whilst displaying a certain maturity in the music itself. After noticing a passion for songs that make us emotional; want to dance and quite literally ‘forget’, we decided to cover one of Peggy Gou’s latest floor fillers, ‘Itgehane aka It Makes You Forget’ hoping that we could evoke the aforementioned qualities of music within other listeners!

The end of the year sees them play their biggest London show to date at Heaven plus an already sold-out homecoming show at the Hebden Bridge Trades Club just before Christmas. Following that, the band embark on tour in Feb-March with tickets on sale Friday, 9th November.

Support for this show comes from Glasgow five piece LYLO.

The Orielles
LYLO + Bull
Tuesday 26th February, 7.30pm
Tickets are £10 in advance (more on the door) and available from the venue in person, from our friends at Earworm Records or online via See Tickets.