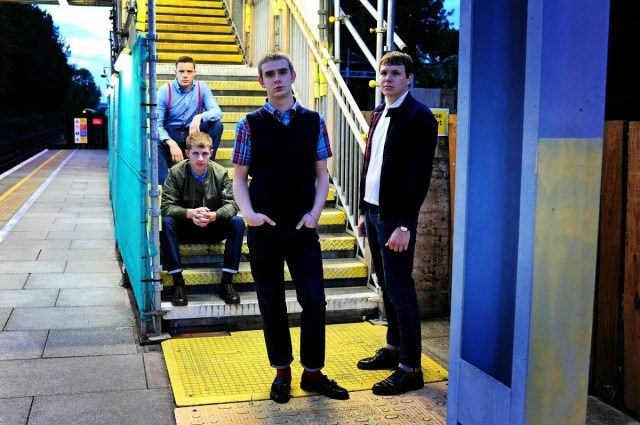 The Spitfires
Emily Capell
Thursday 12th April, 7.30pm
Tickets are £12.50 in advance (more on the door) and are available from the venue and Earworm Records in person or online via See Tickets.

The Spitfires initially formed in 2012 and are led by lead vocalist, guitarist and songwriter Billy Sullivan, Sam Long on bass and vocals, George Moorhouse on keyboards and vocals and Matt Johnson on drums.

The Spitfires might not see themselves as a political band, but their kitchen-sink dramas of disillusionment with modern society speak for themselves, and for the countless young people around the world who feel their voices and struggles are not being heard.

Taking influences from the likes of The Clash, Billy Bragg and The Jam through to Soul, Reggae and Ska, the band have released two albums to date. ‘A Thousand Times’ (2016) was the follow-up to the critically acclaimed debut ‘Response’ (2015) which saw the band enter high in the UK Album Charts and reach #6 in both the independent and vinyl charts, with the single ‘So Long’ charting at #1 in UK Vinyl Singles Chart.

Their work ethic and powerful song-writing, mixed with their acute social commentary and lack of mainstream industry support, has made this fiercely independent band one of the most popular underground success stories in the UK today. This DIY attitude and independent spirit has earned them a dedicated following and sold out shows across the whole of the UK and Europe.

With over hundreds of gigs under their belt, the band have built up a passionate and loyal following that travel over land and sea to enable shows, to be more an ‘event’.

The band recently signed to leading independent label, Hatch Records, who released the Top 5 single ‘Over and Over Again’ in December 2017. The Spitfires third album is due out later this year.

What the press said about The Spitfires:
‘Spiky, rebellious rock ‘n’ roll delivered with no small degree of street smarts and style.’
Clash Magazine
‘The fight-back from the beaten generation starts here.’
Daily Mirror
‘Insurgent energy…demands and then holds your attention’
Shindig! Magazine [4/5]
‘A Thousand Times manages not only to capture the band’s momentum of the past year but expand their sound into new areas’
Vive Le Rock [8/10]

The Spitfires
Emily Capell
Thursday 12th April, 7.30pm
Tickets are £12.50 in advance (more on the door) and are available from the venue and Earworm Records in person or online via See Tickets.