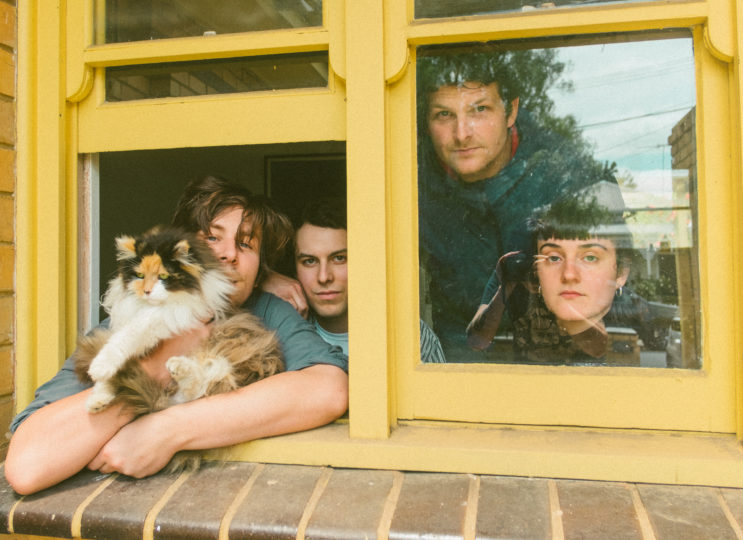 Please Please You presents
The Stroppies
Friday 12th July, 7.30pm
Tickets are £7.50 in advance (more on the door) and are available from Earworm Records, the venue in person or online via See Tickets.

“Whoosh is a silly word,” says Gus Lord of the Stroppies. “There is something completely nonsense about it, especially when removed from any kind of context. For me it conjures up images of something absurd and transient – two things fundamental in the experience of listening to or making good pop music.”

Whoosh may indeed be a silly word but it almost onomatopoeically captures the sound and essence of The Stroppies first proper debut album, one that breezes along with boundless energy, a refrained pop strut, infectious grooves and the sort of jangling guitar melodies that sound like a prime-era Flying Nun band.

Between them, the Melbourne-based band – currently comprising of Gus Lord, Rory Heane, Claudia Serfaty and Adam Hewitt – have been in countless bands such as Boomgates, Twerps, Tyrannamen, Primetime, Blank Statements, The Blinds, White Walls, See Saw and Possible Humans. The band formed together around a kitchen table in 2016 with a heavy focus around the essence of collaboration and a DIY ethos. This led to an acclaimed cassette release of lounge room recordings, which was then pressed onto vinyl to more acclaim. The Stroppies next step was then taking their DIY approach to home recordings into the studio to make a transitional leap to what would become their proper studio debut. “Whoosh is our first concerted effort to make something with a bit more sonic depth,”says Claudia Serfaty (the bands other primary songwriter).  “It was an attempt to take working processes that had been established in a home recording setting and build on them with a broader musical palette in the studio in order to push the band into new territory without compromising what made initial releases so endearing.”

Endearment is something that the Stroppies have no problem retaining on Whoosh. It’s a record that possesses all the spunk and gusto of a young band hurtling forward yet also knowing when to take their foot off the accelerator. It’s an album that simultaneously feels young and fresh but wise beyond its years. “Whoosh is the most robust sounding release we have ever recorded,” Serfaty says. Combining taut post-punk rhythms, indie jangle, seamless melody and sugary pop, it’s a record that Lord says is influenced by: “All sorts of things – life, work, relationships, old cartoons and the last 60+ years of guitar-based pop music in some form or another. This includes everything from Bill Fay to the Clean to Stephen Malkmus.”

Whoosh is a record that combines a natural sense of urgency with a thoughtful approach. Something that the recording process itself was emblematic of. “Budgetary restrictions meant that we had two days to lay the foundations,” Serfaty recalls. “So it was axe to the grind: burning through live takes interspersed with tea and Turkish food from the local kebab shop, which culminated in twelve half finished cuts, rough and ready.” That was the urgent part, what then followed was a focused and labour intensive approach to get the most out of the bare bones of the record as possible. “We spent hours building up, stripping down and mixing the work that had been recorded the month prior, throwing everything we could think of at the songs to see what would stick. We utilised whatever was on hand to pull sounds, including but not limited to vintage synths, rain sticks and an old door frame that we used for percussion.” This was done with Zachary Schneider, a friend of the band, budding producer and established musician who is most notable for his guitar work in bands such as Totally Mild, Free Time and Full Ugly.

By the end of that period the band got so absorbed in the record that they almost lost sight of it. “I’m still a little too close to this record for it to evoke anything in particular,” Lord says. “Except for perhaps dull anxiety. Towards the end of recording I felt like I was drowning in the process and lost all clarity on what it meant or it’s value. Kind of like saying a word over and over again – it starts to lose all meaning.” Although with time comes clarity and even amidst the fog of making a record that has taken over his life, Lord knows the band has made something special. “Reflecting on the process I feel really proud of the album.”

Please Please You presents
The Stroppies
Friday 12th July, 7.30pm. £7.50adv
Tickets are £7.50 in advance (more on the door) and are available from Earworm Records, the venue in person or online via See Tickets.