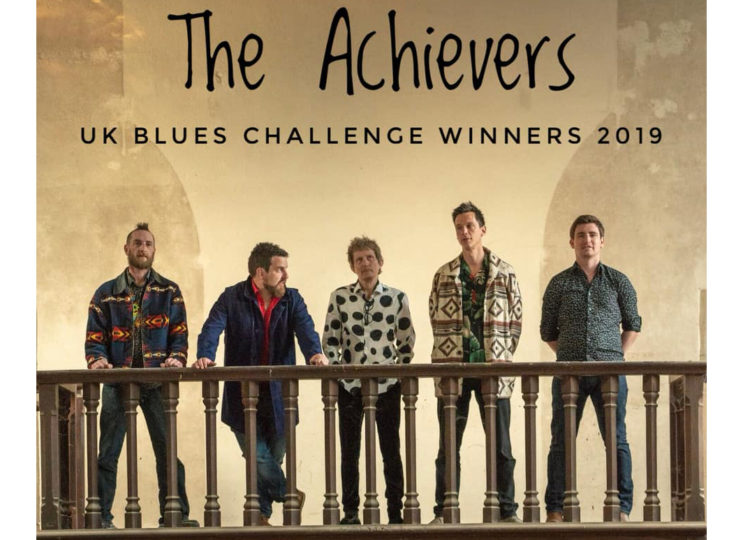 **’This show is now cancelled due to governmental social distancing measures put in place to combat the COVID-19 outbreak. Refunds available from your point of purchase.**

The Achievers are one of the most talked about and critically acclaimed new bands on the UK Blues and Roots Music scene. With a reputation for innovation and originality they prove that soul, groove and song-craft still matter in the blues.

Their own brand of modern, secular ‘Dancefloor Gospel’ has catapulted them from near-complete obscurity to rave reviews and big-stage appearances across Europe.

In September 2019 the band won one of the most prestigious accolades in British Blues Music when they were selected to represent the UK at the International and European Blues Challenges in 2020.

Recorded mostly ‘live in the studio’ over two days in early May 2019 their new album ‘The Lost Arc’ is as much of an event as it is an album – it marks the arrival of The Achievers as a new force in British Blues & Roots songwriting. The fruits of a dedicated co-writing brotherhood, The Lost Arc is deliberately loose, quirky and intimate. Instantly catchy and irreverent, the 10 tracks whizz by in 39 soulful, fat-free minutes.

The band draw on their obsession with American vintage dancing music and the songwriting pioneers of early Rhythm & Blues, Americana and Southern Soul. Lyrics candidly explore, among other things: remedies for modern-day loneliness, the usefulness of a local man with a famous name, and the unnerving sweet-spot between oblivion and recovery.

‘Traditional and quirky at the same time, upbeat and joyful…every song is an undoubted foot-tapper’
Velvet Thunder

‘The Achievers’ passionate approach to music-making really is a joy.’
Morning Star

Tom Killner is fast gaining a virtuoso reputation as a formidable guitarist and his music provides a spectacular showcase for him as a unique contemporary vocalist, mixing soulful blues with rocking funk.

In 2018, Tom was honored with the region’s Best Original Artist Award at the inaugural Rotherham Music Awards.

Tom, along with his band have released two worldwide critically acclaimed albums, Hard Road & Live and the eagerly awaited Get Back Up is a breath-taking addition to this collection. Get Back Up has been produced by Andy Quinn, Producer for the iconic guitarist and founding member of Thin Lizzy, Eric Bell.

Following highly acclaimed live appearances across Europe, where a loyal fan base is growing, Tom’s dynamic and powerful live shows are becoming legendary. A real force of nature!

Here’s what they say about Tom Killner

“The attention this Rotherham youngster has received thus far has focused on his formidable fret-frying guitar skills. But his album deserves to shine a spotlight on his promise as an all-round performer and songwriter too.” 8/10
Classic Rock Magazine“Indeed, that soulful blues guitar, mixed with rocking funk, and a voice which has a resonance much deeper than his age. If you see Killner listed as playing in your UK/US town anytime soon, go see him – I know I will!”
Exclusive Magazine