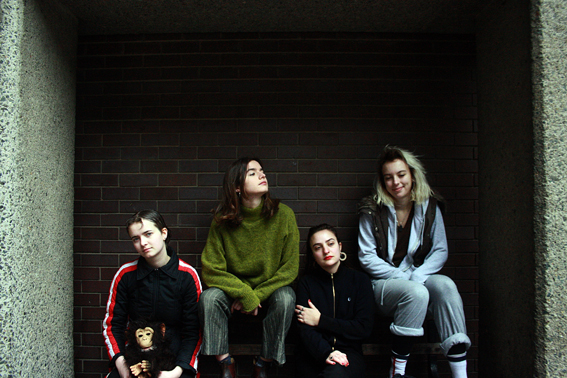 Goat Girl
The Crescent, York
Saturday 27th October, 7.30pm
Tickets for this show are no longer available, it is SOLD OUT.

For information on future shows please sign up to our eNewsletter.

Rough Trade Records have just released the self-titled debut album by Goat Girl. Produced by Dan Carey (The Kills, Bat For Lashes, Franz Ferdinand) in his South London studio, the record already has the press hot under the collar and has helped the four piece secure a rather sweet US tour with Parquet Courts and a bunch of fine festival slots in the summer.

Across 19 tracks in 40 minutes, Goat Girl’s debut creates a half fantasy world out of a very dirty, ugly city reality. In the groups words: “Simply put, it’s an album that comes from growing up in London and the first-hand experience of our city’s devolution. We wanted to think of it as this place seen not necessarily just through our eyes, but someone who can’t get past the abnormalities and strange happenings that exist in our city. We think this gives the freedom lyrically and musically to explore unspoken truths and emotions that we all as humans feel.”

This world is populated by creeps and liars, lovers, dreamers and wonderful lunatics. It’s a very English album — sharp-eyed observations like The Kinks, louche rage like The Slits — but it’s also full of swampy swaggering guitars and Lottie’s filthy drawl. “It wasn’t exactly intentional to have this warped country sound, but I think that was initially what we were all drawn to and inspired by, bands that existed in a lo-fi,dissonant, scratchy context.”

Goat Girl belong to a burgeoning, close-knit south London scene, born in venues like The Windmill and including bands like Shame, Bat-Bike, Fat White Family, Horsey, Sorry, and many more. They’ve built up a strong live following over the last year, headlining their own UK tours and supporting The Fall, Moonlandingz, and Parquet Courts.

Goat Girl
The Crescent, York
Saturday 27th October, 7.30pm
Tickets for this show are no longer available, it is SOLD OUT.