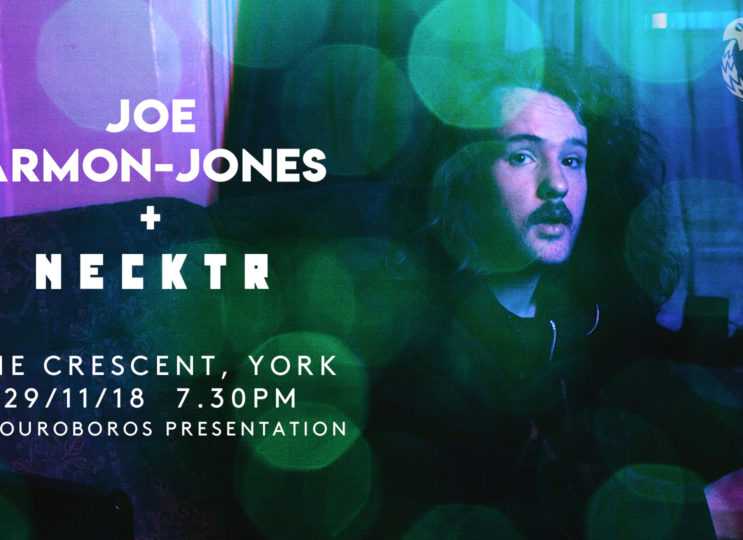 Ouroboros Presents
Joe Armon-Jones
Necktr
Thursday 29th November, 7.30pm
Tickets are £8 in advance (more on the door) and available from the venue in person, from our friends at Earworm Records or online via See Tickets.

Delighted to be joined for a special show by one of London’s finest musicians redefining the ‘jazz’ genre at the moment! His recent critically acclaimed Brownswood album fused jazz, hip hop, soul and dub to amazing effect. We can’t wait to see his band, also comprised of London jazz superstars, put it into action!

SUPPORT comes from Necktr: a 9 piece soul fusion band from Leeds who’s unique interpretation of Hip Hop, Afrobeat, Soul and Ambient music has earned them critical underground status in Leeds’ blossoming groove scene. Having played around the country alongside Nubiyan Twist, Tetes de Pois, Mansion Of Snakes, Wu-Lu, K.O.G and The Zongo Brigade and Afriquoi, Necktr’s live sound explores a wealth of textures and soundscapes as they weave between captivating grooves and anthemic choruses.

“Armon-Jones takes a modern-jazz journey from the discrete influences on that eclectic London sound to its thrillingly diverse present—and stakes his claim as one of the scene’s most promising voices.” ​-Pitchfork
“Bass rich hustle music straight out of the London soul jazz dance lineage” ​-The Wire
“This is the spaced-out soundtrack for the summer”​ -Red Bull Music
“​A continually expansive yet remarkably united work”​ -Clash Music

Joe Armon-Jones, Ezra Collective co-founder and talented keys player, is taking the London Jazz scene by storm with his combination of traditional Jazz, Hip-Hop and Dub flows. Growing up in a musical household, combined with a many-sided musical education, has led Joe Armon-Jones to where he is now. Learning piano from a young age, important early discoveries included Chick Corea and Weather Report. Later, discovering hip-hop would put those discoveries in a bigger context: colliding virtuoso playing with beat-splicing methodology, it’s a clash of cultures that remains influential. Though he grew up with Chick Corea and Weather Report, you get the impression Armon-Jones finds no one as inspiring as his peers.

Be it in different venues across London or touring abroad, those live shows – under his own name, with Ezra Collective, or with musical peers Nubya Garcia and Oscar Jerome – have been an important rehearsal ground, helping to form relationships and forment ideas. He’s also toured with the likes of Ata Kak and Pharoahe Monch, connecting with artists outside his immediate circles. “Getting everyone in the same room and creating a vibe,” is how the gifted keys player and dedicated jammer Joe Armon-Jones describes his passion for music, and it can be seen through the collaborative nature and ethos of Ezra Collective.

Debut Album: ‘Starting Today’
Joe Armon-Jones combines free-flowing, dynamic energy with a bigger vision. A prodigious, head-turning keys player, debut album Starting Today (released 4th May 2018) is a showcase for his ludicrous chops on the piano, and the like-minded, equally talented bandmates who join him on the record. But there’s a clear, tangible thread which runs through it too: from hip-hop to dub, a wide spectrum of sounds is refracted through a shared, dedicated approach to playing.

Ouroboros Presents
Joe Armon-Jones
Necktr
Thursday 29th November, 7.30pm
Tickets are £8 in advance (more on the door) and available from the venue in person, from our friends at Earworm Records or online via See Tickets.