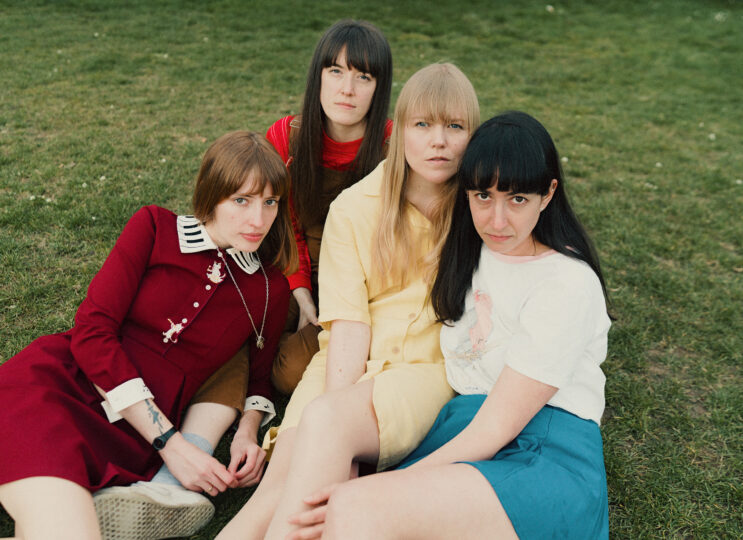 LOS BITCHOS are an international intrumental surf /psychedelic band hailing variously from the UK, Australia, Sweden, and South America. One member has an Uruguayan cowboy grandfather, while another once rode two ponies simultaneously on Swedish national telly, in an outfit designed by the same man who made ABBA’s costumes. Los Bitchos’ sound? That’s pretty international too – Peruvian chicha, cumbia, Turkish psych, surf guitar – and a bit of Swedish pop, of course. After years of live shows, going on tour with Mac DeMarco, The Black Lips, Ty Segall, Bodega, and releasing a song with Altın Gün in 2021, they have finally finished their debut, produced by Franz Ferdinand’s Alex Kapranos.

Los Bitchos are very possibly your new favourite party band, with instrumental voyages that evoke scenes of swaggering into a desert saloon bar and setting alight to a row of flaming sambucas, or riding shotgun with a Tarantino heroine, or having the fiesta of your lives under a giant piñata with all your friends. They’re the girl gang you definitely wouldn’t mind being stuck on a tour bus with.

Serra Petale (guitar), Agustina Ruiz (keytar), Josefine Jonsson (bass) and Nic Crawshaw (drums) hail from different parts of the world but met via all-night house parties, or through friends. Their unique sound binds them together, taking in a retro-futuristic blend of Peruvian chicha, Argentine cumbia, Turkish psych and surf guitars. It’s not unlike if Khruangbin – their spiritual cousins, who are fans of Los Bitchos – spent a night getting slammed on cheap mezcal at the Shacklewell Arms in Dalston.

“I wanted to sound like Van Halen and Cocteau Twins – but from Turkey,” says multi-instrumentalist Serra, who was born herself in Western Australia and takes a lot of inspiration from her mother’s 70s Anatolian rock records. The rest of the band bring influences from their upbringings, too. Agustina comes from Uruguay and the group fell in love with her Latin-American music collection (as much as they did Madonna’s ‘La Isla Bonita’ period). Then there’s Josefine from Sweden – “who brings a touch of out-of-control pop,” her bandmates joke – and Nic from south London, who drummed in various punk bands before rounding off Los Bitchos. “Coming from all these different places,” says Serra, “it means we’re not stuck in one genre and we can rip up the rulebook a bit when it comes to our influences.”

Los Bitchos finished recording the album right before the pandemic hit. They kept momentum going during lockdown with their radio show, Planet Bitchos, on esteemed internet station Worldwide FM, which ‘hits the road’ every month to explore a new far-flung corner of the globe. It was a welcome respite in particular for Nic, who was swept up with her job as a physiotherapist working on the NHS frontline. “Even in times of adversity, everyone’s strength has been really inspiring,” says Agustina. “And we bring out the best in each other, too.” The band’s live performance for KEXP, which was recorded in France during the 2019 Trans Musicales festival, was let loose last March and has since racked up over 1.5 million views, evidencing their knack for a bun-tight groove, the ease of their rhythm section and their penchant for percussion: timbales, bongos, shakers and cowbells all star.

Let The Festivities Begin! is a maximal, Technicolour strut of an album of hallucinatory surf-exotica, with a celebratory title, something you might say as you toast with your shot glass, signalling the end of the pandemic era and ushering in a bright new dawn of wild abandon. “It’s about being together and having a really good time,” say Los Bitchos. Let the festivities begin!