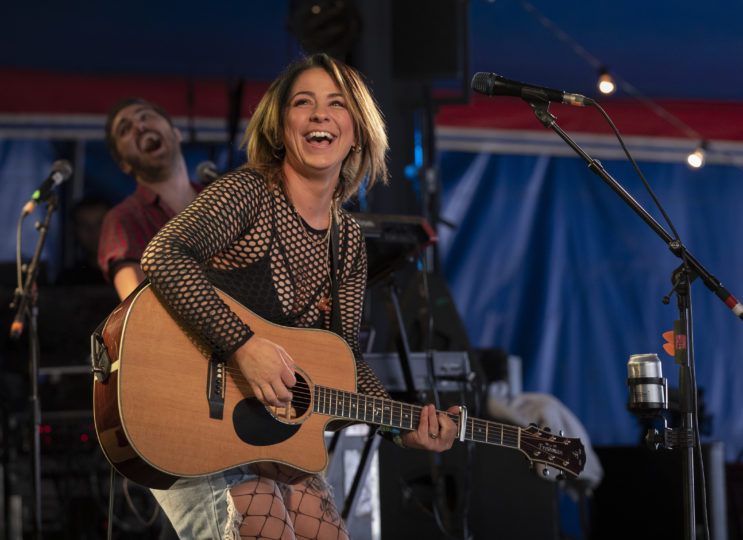 Lucy Spraggan is in a good place and wants to share it with you. She is happy in love, life and music: three things that are reflected in the anthemic, upbeat, and infectious sound of her new album. The past few years have been the best of times for the singer-songwriter and Today Was a Good Day sings that message loud. The UK has one of the highest youth suicide rates in the developed world and an ever-growing incidence of mental health difficulties across our population: Spraggan’s personal experience of dark days compels her to pass on the message of hope that forms the backbone of this album.

It’s been seven years since Spraggan appeared on the X Factor in 2012 and she’s open about the difficult times when she felt suicidal. “I was a young person with fame and money in my pocket. I was dragged from club to club to play and given free booze,” says Spraggan. “I’m not sure where I would be without it the experience, but it was just too much for my brain. I was drinking and partying and in a terrible place.”

She reached her lowest moment driving down a motorway 2013. With her foot on the accelerator at 120mph, she closed her eyes. “I was about to turn my wheel into the central reservation when my dog (her Boston Terrier, Steve) sneezed. I knew I couldn’t do it to him and he saved me. I came straight home and started Cognitive Behavioural Therapy and my recovery started from there. It opened the door to hope.”

Spraggan wants use her experiences to help others. Last year, she released ‘Stick The Kettle On’ – the first track on this the Today Was a Good Day album – in support of CALM – The Campaign Against Living Miserably. The track was written with Roy Stride (Scouting For Girls), and Stride and Spraggan decided work with CALM to help people who suffer with mental health issues.

Lucy’s new album, Today Was a Good Day marked a new chapter for Spraggan musically. She signed a new record and publishing deal with Cooking Vinyl in 2018. The new album, produced by Jon Maquire showcases Spraggan’s voice in the structure of the songs. Overall she sounds at her most confident and accomplished, and ready to build on her 50 million views on YouTube and 25 million streams on Spotify. The most Googled musician of 2012, Spraggan was the first X Factor artist to play Glastonbury and will perform there again this year on the Avalon Stage after filling the Acoustic Tent in 2017.

The album was released May 2nd and achieved another No.12 position in the nation UK album chart.

October 2018 saw Lucy sell out yet another UK Headline tour selling nearly 14k tickets. She toured the UK and Europe with Melissa Etheridge and then went to the US and played SXSW for the second year running, followed by a week of west coast shows and a Florida cruise show with Melissa Etheridge again. She returned to the UK and played another sold out under play tour in the UK and Europe and Lucy is now coming to the end of her US and Canada run of shows throughout June.