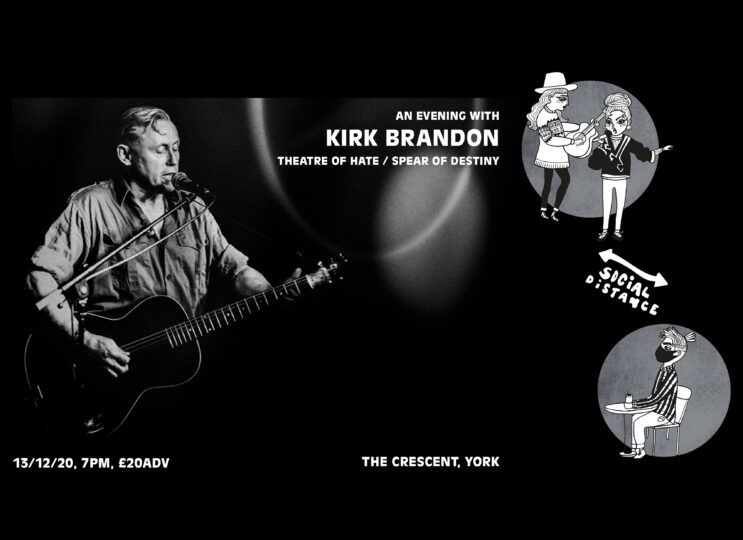 Kirk Brandon is the voice of Spear of Destiny, Theatre of Hate and Dead Men Walking. With over 15 studio albums and countless single releases, his career now spans well over 30 years. He has enjoyed worldwide success with all three of the above bands and is also a leader in every punk rock poll by being the singer and songwriter in The Pack.

Over the last 9 years, Kirk has released five solo acoustic studio albums (the “Dutch Masters” series) that have pulled tracks from all era’s of his career, these albums have also featured many of the people Kirk has worked with and collaborated with over the years including Derek Forbes (Simple Minds), Slim Jim Phantom (Stray Cats), Mike Peters (The Alarm) & Clint Boon (Inspiral Carpets).

The latest of these solo acoustic albums entitled “Dutch Masters Volume Five” has become, in it’s first year of release, the best seller in the series.
“DM5” features two outstanding Theatre of Hate interpretations, a James Bond theme and a Country and Western cover of a Ry Cooder tune !!!

Over the past 2 years Kirk has joined by master cello player Sam Sansbury both in the studio and at live shows. Two exceptionally received studio albums have been released “Cello Suites” Uno & Duo.

During 2018 shows took place in Austrailia, USA and all across the Uk.

During these torturous COVID-19 times for artists and live music venues across the globe the opportunity has become available for Kirk to play some very intimate socially distanced shows. It has been a long time since Kirk hit a stage on his own with just acoustic guitars and his songs for company but it’s a challenge he is very much looking forward to.

Expect some very special events that will feature all the hits and misses!!! including ‘Never Take Me Alive’, Do You Believe In The Westworld?’, ‘Worldservice’, ‘ So In Love With You’, ‘Young Men’, ‘Original Sin’.