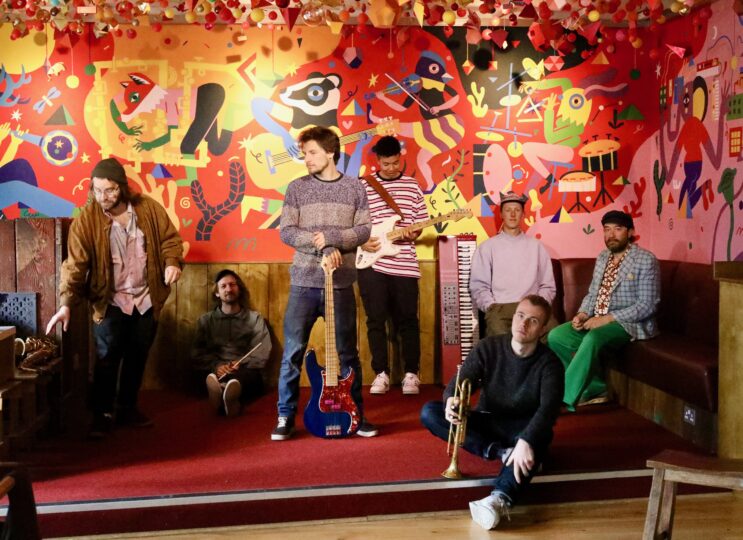 Ouroboros Presents
Snazzback
Wednesday 4th August, 7.30pm
Tickets are £8 in advance (more on the door) and are available online via See Tickets.

“An explosive sense of energy…buzzing and fizzing with fresh ideas”

“…a feather-light touch and an elegance that’s hard to beat.”

Bristol seven-piece Snazzback bring the sound of reopened dancefloors, of communal release, and of the joyful sound of dancing outside in the sunshine to live music. Their second album ‘In The Place’ overflows with deep grooves and loose, lolloping rhythms that tease and play, sometimes languid and carefree, other times energy spiralling upwards – and taking the listener with them, each and every time. Their music is soaked in great black American dancefloor music, whether that’s the sound we call ‘jazz’ or hip hop. They also bring other flavours – interlocking Afro-Latin rhythms, electronica and hypnotic rock, all marinated in Bristol’s long musical histories.

The album rests on the band’s hypnotic, rolling musicality and inventive bringing-together of sounds, evident in their phenomenal live performances which were honed in legendary city centre busking sessions and locally-famous venue residency. They’re mad tight and heavily dextrous, a band who are tuned into each other and into the extended family of their audiences. Tracks like ‘Reading’ suggest a smoked-out Ezra Collective or Moses Boyd, whilst ‘Triangle’ brings powerfully scuzzed-out guitar sounds into the mix.

‘In The Place’ was recorded in their tiny self-built studio. They wrote together, improvising sounds into a sonic scrapbook, with more production, electronics and ambient sounds than their previous live recordings. The album was fed by the band’s deep community connections in the city, but also by the music the players listen to: Portico Quartet, Hendrix, Rip Rig + Panic, Azymuth and iconic sax player Shabaka Hutchings to name just a few. There’s an openness to collaboration, experimentation with unconventional sounds, and an exploration of genres outside of an immediately obvious palette.

They have the kind of creative abundance that bands only achieve through years playing together. In Snazzback’s case that includes busking and gigs all over the South West. The band met through a myriad of low-key but powerful Bristol spaces: People’s Front Room, Leftbank and Jam Jar among other places. They’re locally famous for their distinctive, care-free and funk-punky city centre busking sessions – ‘strictly impromptu street jams’ as the band call them. Busking can be a huge amount of graft, says Rich Allen, who plays bass. “Lugging gear out, playing in the blazing sun and freezing cold, putting up with shit from people… Musically it’s incredibly freeing as you don’t owe your audience anything. They haven’t paid to be there. If it all falls apart while you’re busking, who cares! The risk-taking has definitely fed through to our live shows.”

It’s an attitude and sound that has wowed audiences at Glastonbury, Shambala and Boomtown and at their weekly residency at the influential Gallimaufry. Each week they’d learn a whole new sound or songbook – dubstep, Curtis Mayfield, Brazilian music or film soundtracks – and re-interpreted the sounds with their own flavours. Their December 2020 Bandcamp release was recorded on the Galli’s roof and is titled ‘Koch Loch’ in celebration of the venue’s main man James Koch.

Bristol has always had its own sound and now there’s a crop of young players. Snazzback are revitalising the scene, and soon they’ll be revitalising dancefloors again too, on their UK tour starting July 21st.

Ouroboros Presents
Snazzback
Wednesday 4th August, 7.30pm
Tickets are £8 in advance (more on the door) and are available online via See Tickets.