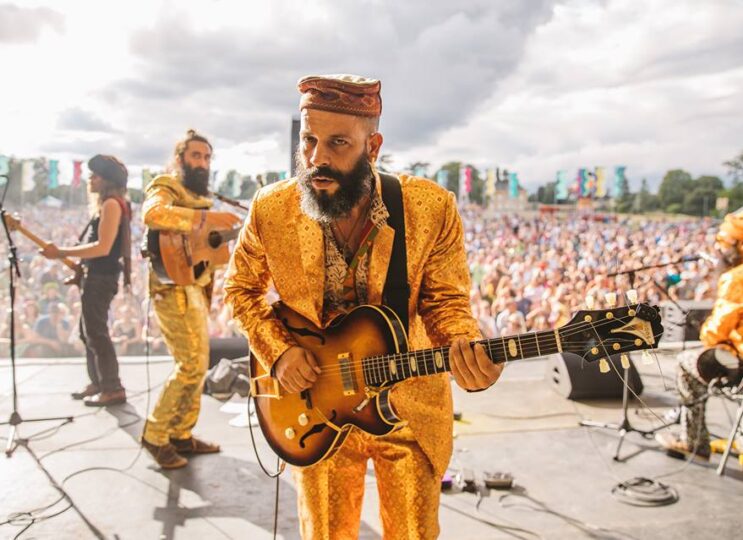 Ouroboros Presents
The Turbans
Wed 28th July, 7.30pm
Tickets are £12.50 in advance (more on the door) and available online via See Tickets.

“The Turbans are a stomping ensemble that sound like Eastern Europe swinging the Middle East around by the arm in the middle of a raucous party.”
Songlines

International legends The Turbans bind together musics from ‘manywhere’ with their interstellar live show which ignites the crowd. Sonically huge and visually arresting, they are a powerhouse of talent, bringing their vibrant and unique sound to audiences who can do nothing more than smile, dance and shout for joy. Growing from the intertwining paths of many talented musicians travelling the world, this extraordinary project has grown in a few years from very humble beginnings, into a progressive name on the London music scene. Its members have gathered from countries such as Turkey, Bulgaria, Israel, Iran, Greece and England to perform in concerts and festivals around the UK, North America, Middle-East, Hong Kong, India and Europe. Their aim is to bring music to the people, young and old alike, mixing vibrant spontaneity and authenticity with multi-genre instrumental and vocal excellence.

In a politically divided time it’s hard to imagine a band comprised of members from across Europe and the Levant as not being inherently progressive. ​The Turbans​, whose self-titled debut album was released on 6 April (​Six Degrees Records)​, features musicians with roots in Turkey, Bulgaria, Israel, Iran, Greece, Spain, and England. Yet transmitting a political message was not their initial impulse. It was simply music.

And friendship, as it turns out. ​Oshan Mahony,​the “seventh best guitar player in the band” he says with a laugh the core group is seven members — met violinist Darius Luke Thompson i​n Kathmandu. The two half-Iranian, half-British nomads immediately hit it off. They began busking throughout India, picking up musicians along their Journey.

Seven years later The Turbans delivers to global audiences the same high-energy blend of Balkan, klezmer, Gypsy, and sundry other styles they’ve been bringing to venues around the world for years — India, Hong Kong, the Middle East, and all throughout Europe and North America.

Ouroboros Presents
The Turbans
Wed 28th July, 7.30pm
Tickets are £12.50 in advance (more on the door) and available online via See Tickets.