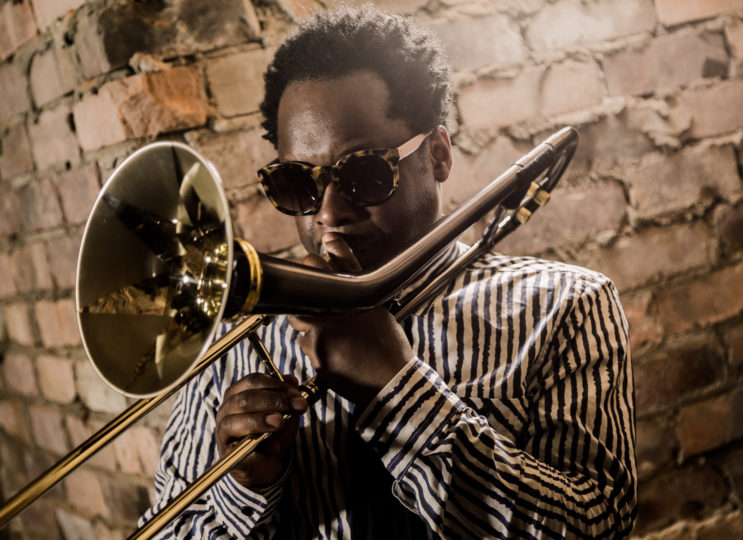 Ouroboros presents
Dennis Rollins Funky-Funk!
The Crescent, York
Saturday 19th October, 7.30pm
Tickets are £13 in advance (more on the door) and available from the venue in person, from our friends at Earworm Records or online via See Tickets.

Following 8 years working with Maceo Parker, funky’bone maestro Dennis Rollins debuts his all-new groove outfit ‘FUNKY-FUNK!’ An award-winning ‘bone player and still at the forefront of jazz worldwide, Dennis brings an electrifying band he guarantees will make you move your body! Exploring infectious grooves with sumptuous funky trombone melodies, this band is a must see!

Dennis says “FUNKY-FUNK! is a outfit I’ve dreamed of putting together… A seriously funky band with an infectious sound… It makes you wanna move!”

Ouroboros presents
Dennis Rollins Funky Funk!
The Crescent, York
Saturday 19th October, 7.30pm
Tickets are £13 in advance (more on the door) and available from the venue in person, from our friends at Earworm Records or online via See Tickets.

Bio:
Dennis Rollins is well-known on the British and international jazz scene and is celebrated for his versatility and muscular approach on that underrated instrument, the trombone. Born in 1964 in the Midlands to Jamaican parents, and raised in South Yorkshire, Dennis cut his teeth at the age of 14 studying and performing with The Doncaster Youth Jazz Association.

After years of study, Dennis moved to London and began playing with the National Youth Jazz Orchestra (NYJO), and the legendary all-black jazz big band The Jazz Warriors. Over the years he has established a reputation as an artist of excellence, and has lent his unique and stylish talents to some of this country’s, and indeed the world’s, top jazz and pop personalities such as Courtney Pine, Monty Alexander, Jamiroquai, US3, Brand New Heavies, and Blur. He is also a member of the legendary Maceo Parker’s band.

In 2006 his jazz/funk outfit Badbone & Co won the prestigious BBC Jazz Award for Best Band and the following year he picked up Trombonist of the Year at both the British Jazz Awards, and the Ronnie Scott’s Jazz Awards. He also received nominations in the Urban Music Awards and the Parliamentary Jazz Awards. Dennis was nominated twice in the 2008 Parliamentary Jazz Awards – for Jazz Musician of the Year and the Jazz Education Award; he won the latter in a ceremony hosted by Paul Gambaccini at the House of Commons Terrace Pavilion. In February 2008, in a ceremony at Mansion House, Doncaster, Dennis was given Honorary Freedom of the Borough in recognition of his successful musical career, and for his role as an inspiration to Doncaster’s musical youngsters.

As part of Her Majesty the Queen’s Birthday Honours 2018, Dennis was honoured with an MBE for services to music.