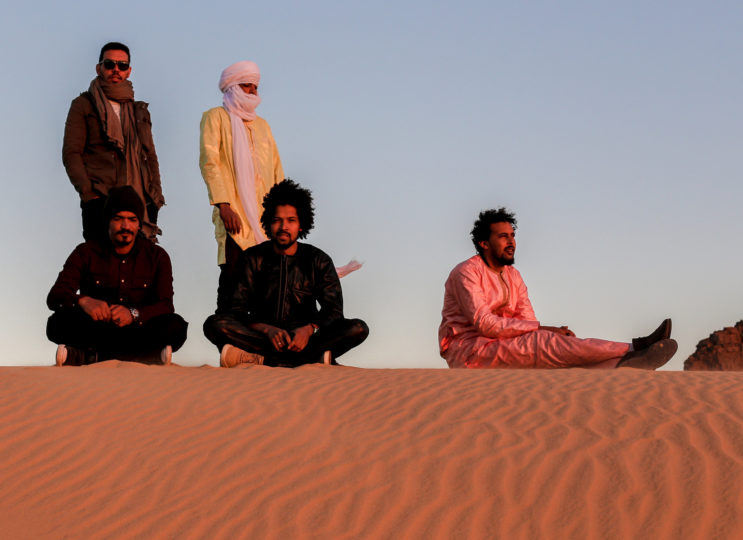 Ouroboros presents
Imarhan
Sunday 11th August, 7.30pm
Tickets are £12 in advance (more on the door) and are available from Earworm Records, the venue in person or online via See Tickets.

When Imarhan released their self-titled debut album in 2016, their tender, soulful, intense vision of a genre of music that was already flooded with talent and exposure still managed to float to the top and be heralded as a pivotal record of the “New Wave Of Tuareg Music”. It is with much anticipation that the band from Tamarasset, Algeria have announced the details of their second album “Temet“, due February 26 on City Slang.

“Temet“ is a huge leap forward in the creative sound and production for the band. Whereas their debut was anchored in the meditative desert blues tradition, Temet blows clear of any such notions, finding bounce and drive by stirring their sound with funk, fuzz, disco and rock.

This is not an alien mood to the band: any of the (thousands?) of people who have danced at their live shows will attest to the disparity between their emotional and thoughtful first release and the raucous, ecstatic live shows the band ripped through, for hours at a time, in their 2017 tours. While “Temet“ is decisively more eclectic than their debut, their wisdom and singular vision is as manifest as it was in their first offering. Imarhan’s experience as a touring band since the first album has only honed their focus and meaning behind their music: Their focus in this case is a Nomadic traveller’s reflection on today’s struggles. “Temet” in Tamashek means “connections” – It’s an energetic wake up call for unity, reminding people that we are all are connected and that only through the acceptance and uptake of this union will we be able to solve the troubles all cultures seem to be dealing with in this important moment in time.

“Temet“ also finds the band merging with the realities of their own maturity and influence. In the decade leading up to their first release, Imarhan were considered the youngsters of the Tuareg Desert Blues revolution. They started in 2008 whilst still still at school under the guidance and counsel of their “bigger brothers” Tinariwen. Adding to this legacy was a meaningful guitar gifted to Sadam by his cousin and key member of Tinariwen, Eyadou Ag Leche, who also produced the first Imarhan album. Their status has now been elevated with the growing success of Imarhan; the international press, and the worldwide tours through the US, China and Europe have paved their way to become their own entity within the Algerian music community. With this ascension of career and influence, they ultimately have become the new elders in their community and have been granted the importance and responsibility towards the blossoming new generations. Their role as a leader to groups of young people around the Mali border region makes them increasingly important in the direction of the hearts and minds of people directly in the frontlines of the changing modern world.

“We want children to be educated, to develop a mindset that will protect what is left of this community because I’ve come to the conclusion that everything has an end and everything evolves. Even the Tamashek language is gradually disappearing. (…) Even we’re confronted with this issue, but we’re fighting to preserve it.It’s the music that keeps us connected to the language, and allows us to continue speaking it.”

The knockout tracks are immediately recognisable on a first listen: the first single ’Azzaman’ has hints of krautrock riffing before turning into a passionate new community anthem or ’Tumast’ as a blazing, fervent liberation song that beats giant all-for-one handclaps thundering over a frenetic guitar riff, leaving one in the delirious ecstasy of freedom, or ’Ehad Wad Dagh’, the intensely heavy disco jam that really blows out any pre-existing concept of Tuareg music. However, it is really important the album isn’t judged on it’s powerful dance songs alone; there are subtle tones here as well, there’s also the songs that relate to the individual sound of the first record, classic elegiac Imarhan songs that spread out like an entire landscape in front of you, ‘Imuhagh’, ’Tarha Nam’, ’Zinizjumegh’ and most notably the emotional and heedful acoustic guitar album-closer ’Mas S-abok’.

With “Temet“, Imarhan have firmly established themselves as a band to reckon with. Rather than being distracted by meddling around with big producers or famous guests, they’ve focused this release on their inherited strength of songwriting, using the eternal bonds in their community, families and friendships as a blueprint not only for an amazing standalone album, but as a reference for generations to come.

“We hope that Imarhan will allow the younger generation to become aware of the fundamental importance of friendship. As long as someone is by your side supporting you, who begs for your friendship, what more could you want out of life? You will want for nothing.”

Ouroboros presents
Imarhan
Sunday 11th August, 7.30pm
Tickets are £12 in advance (more on the door) and are available from Earworm Records, the venue in person or online via See Tickets.